The firm is currently providing the commodity to more than 130,000 residents.

• Managing director Daniel Ng'ang'a has said accountability has allowed it to attract funding that has enhanced its services.

• The firm has also reduced its non0revenue water from 65 per cent when it was formed to 23 percent. 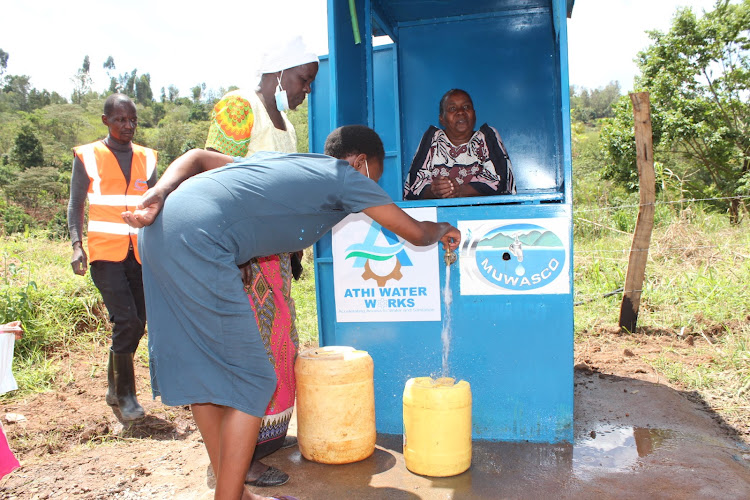 Transparency and good rapport with the community has propelled Murang'a firm to be one of the best water service providers in the country.

As many water firms in the country grapple with losses and low water coverage, the Murang’a Water and Sanitation Company has managed to cover up to 96 per cent of its area of jurisdiction.

The firm covers Murang’a town and its environs and is currently providing the commodity to more than 130,000 residents.

In 2019, Kericho Water and Sanitation Company officials went on a bench-marking trip to Muwasco to learn about water and environmental management.

Kewasco MD Joseph Terer said poor conservation of the Mau Forest and drought had hurt the water supply and the tour was organised to deal with the crisis. Kewasco loses 52 per cent of its water.

On the other hand, Muwasco MD Daniel Ng’ang’a said the Murang'a firm has reduced non-revenue water from 65 per cent when it was formed to 23 per cent, one of the lowest in the country.

This, he said, is as a result of the installation of modern equipment such as smart metres combined with enhanced surveillance systems.

“Non-revenue water stems from illegal connections and non-efficient billing, but we have been able to use the Nyumba Kumi model to survey our water management. When we started the company, non-revenue water was at 65 per cent,” Ng’ang’a told the Star.

Many water companies lose water due to dilapidated pipes that have been in use for decades and have no funds to instal new ones.

Ng’ang’a, the immediate former chairperson of the Water Service Providers Association, asked residents to continue reporting any cases of water theft, saying prices would go down if everybody paid their bills as required.

The company has reinforced its infrastructure through funds it receives from donors and through loans.

It has attracted funding from the World Bank, Water Sector Trust Fund, the Netherlands and NGOs.

In 2016, it received a grant from the Dutch government for a Sh16.9 million water project that connected more than 9,000 residents to clean drinking water from Mathioya River.

“That year, only two water firms in the country were shortlisted for the grant because they considered benchmarks of good management,” Ng'ang'a said.

He said Muwasco is accountable for its resources and that its audited accounts are posted on its website.

The company has a pro-poor policy that allows it to connect people living in informal settlements with water after which they pay for the connection over time.

In areas such as Mjini slums in Murang’a town, the firm has established water kiosks that sell water at Sh2 per 20-litre jerrycan to residents.

The firm has also partnered with American NGO Can Do Kids to establish four 250,000-litre communal water tanks.

The partnership will enable the establishment of a water laboratory that will propel the firm to a new level with the provision of water.

“We are negotiating with financiers to actualise this plan,” he said.

The firm also sets aside an annual budget channelled towards conservation of the environment and plant seedlings that are then distributed to residents and learning institutions.

“If we do not manage our environment, it is our company and people that will suffer. We also encourage those near watch catchments to not destroy the environment,” he said.

Last week, the firm partnered with the Ministry of Water to provide more than 2,500 residents of the semi-arid Gaturi ward with the commodity.

The project was celebrated by residents who have been complaining over the long distance they walked to access the commodity.

The secret to succeeding in the sector, Ng’ang’a said, is openness and operating its business beyond any reproach.

“We also engage stakeholders consistently to get their views and support,” he added.