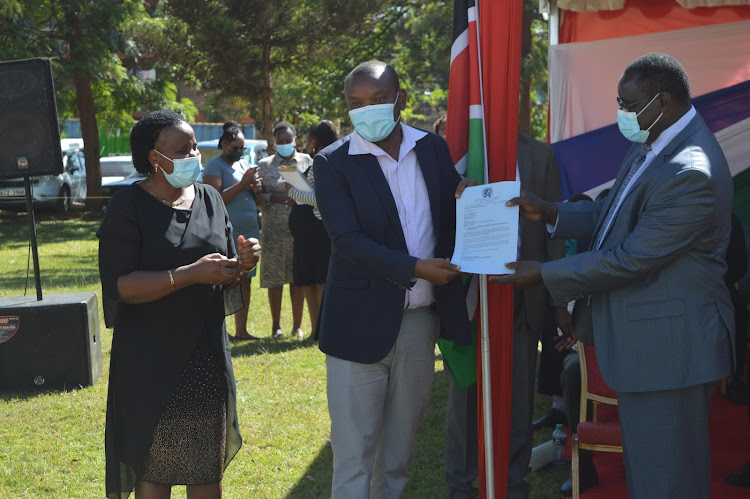 Promotion From Left) Mary Kamau CEC education looks on at Nganga Meja, an employee in the education department, as he receives a promotion letter from Governor James Nyoro on November 18, 2021.
Image: STANLEY NJENGA

Kiambu county government has initiated a scheme of service to boost employees productivity through promotions.

He was peaking on Friday at the county government headquarters in Kiambu town during the issuance of promotion letters to 1,552 employees drawn from various departments.

He observed that when he took over in 2020 there was no scheme of service and therefore employees had stagnated.

"We have just been told that since 1993 during the defunct councils and even after devolution, people were just being appointed and no scheme of service or a way you could improve," said Nyoro.

The county head said that his government had some workers who were employed with diplomas but later acquired degrees or even Master degrees but have stagnated at work.

"You go to school,  get your diploma, get your first degree, get a Master degree and also a PhD and yet that is not recognized as there is no system that recognises this kind of input," said Nyoro.

He said the county is working to address the problem.  "This is work in progress to make sure that there is a scheme of service that graduates you until you hit the ceiling on your category and then you can jump into the next level because the sky is the limit," said the governor.

He added that the county is facing another problem of work mismatch which is affecting productivity.

"You could be the best accountant but in this county you are working as a plumber as it depends on how you were engaged and who engaged.  Without a scheme of services, this was made possible," he said.

He added that the skill mismatch is affecting and will continue to affect productivity.

Nyoro noted the county  is in discussions with human resource experts to address the skill mismatch problem.

Th governor said that when he came into office,  he was confronted by a team of nurses who told him that they were clinical officers but the county government recognized them as casuals.

He said this prompted him to issue orders that no professional should be referred to as a casual as it was demeaning to the course and profession.

Nyoro added that so far the county will be having over 4,400 employees who are being promoted.  The first batch will be 1,552 from across all departments.

The governor added that ECDE teachers have been absorbed after years of being given stipends and are now enjoying their permanent benefits and medical cover. 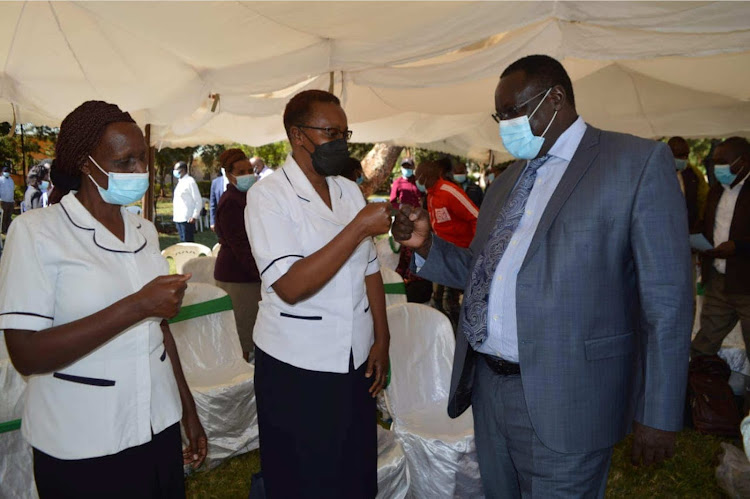