Three-year-old Kinyanjui developed the disorder when he was just one year old; started as ringworms. 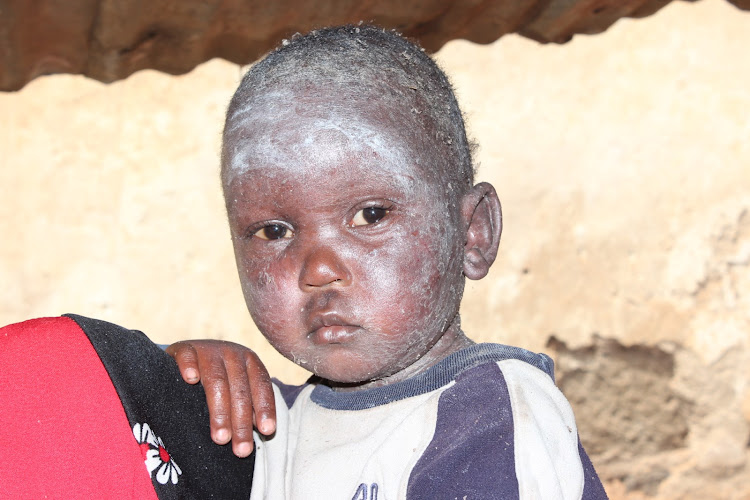 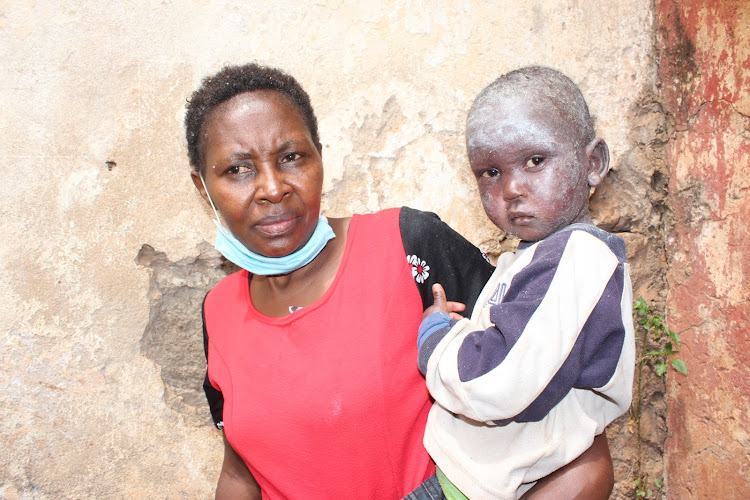 A 50-year-old woman from Murang’a town is appealing for help to treat her grandson’s peculiar skin condition that has made him an outcast.

Three-year-old Mark Kinyanjui developed a skin condition when he was just one year old. It started as ringworms.

His grandmother, Alice Wambui, took him to Murang’a Level 5 Hospital and an emulsifying cream was prescribed, but the condition flared every time she stopped applying it on his skin.

His skin became dry and very itchy, making the boy uncomfortable and prompting him to scratch himself all over the body.

But that only worsened the situation as the skin became scaly and started peeling off, leaving small wounds whenever he scratched further.

Kinyanjui’s mother had the boy when she was in Form 3.

When his skin condition deteriorated, the teenager made it clear she did not want to take responsibility for him and tried contacting several children’s homes, which rejected the boy.

One morning, the girl fled, leaving her son with his grandmother. The boy could not be taken to a daycare facility as other children did not want to interact with him.

His mother is currently working at an eatery in Nairobi, and just recently started reconnecting with her child, but with another child and being a single mother, she is unable to support her firstborn.

Kinyanjui refers to his grandmother as his mother.

Desperate, Wambui started making chips and bhajia by the roadside on Vidhu Ramji estate in Murang’a town to support herself and her grandson.

Wambui told the Star that since the boy got the condition, they have frequented the Murang'a Level 5 Hospital for weekly check-ups.

With her meagre earnings, she is sometimes unable to buy the drugs prescribed to him, a situation that worsens his condition.

“[Sometimes] he wants to bask in the sun and keeps going back when I am not looking, but his skin cracks even more and worsens his condition,” she said.

The boy is now in constant pain and his body is filled with small wounds.

The grandmother says he has trouble falling asleep because of the itch and pain, especially at night.

She says some people have issues buying from her after they see her grandson’s skin condition.

“If only I can get help in acquiring the medication needed consistently, I know with time the boy will heal,” she said.

She is worried that the boy should be enrolling in school, but the condition causes children to alienate him.

The boy clutches to his grandmother without letting go and does not talk much. He looks withdrawn.

Ezekiel Kirimi, a dermatovenerologist at Murang’a Level 5 Hospital, said he has seen the child a few times and that he has a condition known as exfoliative erythroderma, a severe inflammation of the skin that causes it to peel and scale off.

The condition is caused by atopic dermatitis that can affect a child from the age of one month but can also affect adults.

Its main symptoms are itchiness and dryness of the skin that leads to inflammation and causes patches of skin to harden and thicken.

He said children born with the condition have one or both of their parents with skin conditions, asthmatic conditions or allergic rhinitis that react to dust or pollen and cause running nose, watery eyes or sneezing.

Exfoliative erythroderma stems from atopic dermatitis, a chronic condition that makes the skin red and itchy. When the right medication is used, the condition goes into remission.

“We suspect that this child is unable to get the medication prescribed to him and that is why he gets the flares that have caused him to progress to exfoliative erythroderma,” he said.

Management of atopic dermatitis involves keeping the skin moist by applying emulsifying creams that create a barrier that hinders allergens and germs from accessing the skin and stops the itch.

The drug acts as part of the skin to assist it to function normally and also seals the cracks, preventing moisture loss from the skin.

“The main complication of atopic dermatitis is the exfoliative erythroderma, the condition that the child is currently suffering,” he said, adding that the skin is completely dry and scales off.

The child is susceptible to fevers and infections because the skin barrier has been broken.

Such a child, he said, has to be keenly monitored so that he does not develop skin failure syndrome where all the functions of the skin, like thermal regulation, are compromised.

“At that level, the child would need to be admitted for treatment so we advise guardians to adhere to medication and report to the hospital when they notice any changes to the child,” he said.

Should they get financial constraints that hinder treatment, they should report back to the doctor so that they can be advised accordingly.

Diet is key in the management of skin conditions as patients lose a lot of proteins when the skin peels, he said.

Mothers are, therefore, encouraged to provide a balanced, high protein diet while adhering to the right medication since the skin sheds itself after 28 days, meaning the skin condition improves.

If managed at its early stages, Kirimi said, the condition would only require emulsifying ointments that cost an utmost of Sh200 each.