Many of them sometimes only get checked when it is already too late despite suffering from chronic illnesses. 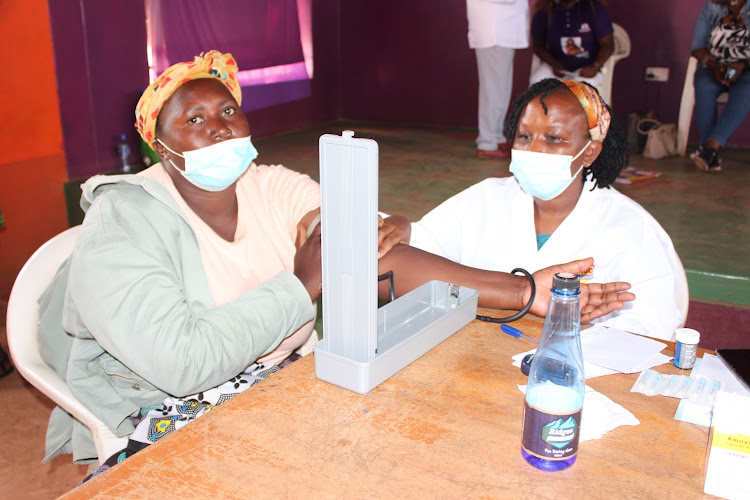 A doctors checks the blood pressure of a patient during a free medical camp at Kahuro shopping centre, Murang'a, on Saturday.
Image: Alice Waithera

Many elderly people in Murang’a county are unable to access proper health care due to poverty.

Many of them sometimes only get checked when it is already too late despite suffering from chronic illnesses such as diabetes and high blood pressure.

In many instances, many are charged with the responsibility of taking care of their grandchildren while their children seek jobs in urban centres further aggravating their situation.

The funds they receive from the Cash Transfer Programme are not enough to support their grandchildren and cater to their health needs.

On Saturday, elderly persons shocked doctors when they turned up at a free medical camp at Kahuro shopping centre in Kahuro subcounty with progressive illnesses.

Mary Wambui said she was unable to walk the long distance from her home to the nearest health facility.

Wambui, 65, also expressed concerns that medical care is too expensive and that she is unable to afford it.

“We are very happy when such camps are brought near our homes because they offer us free treatment,” she said, adding that she arrived at the camp by 6.30am and found a huge crowd.

Wambui challenged the government to use its resources to get health services closer to the people, admitting that many of her peers are in poor health.

Another patient, Rachael Wanjiru, said many women suffer from gynaecological illnesses in silence because they are unable to open up to doctors, especially to male medics.

“Many will wait for such camps, that is, if they can talk to a woman so that they can explain their illnesses,” she said.

According to her, the government should organise camps specifically to screen women for breast and cervical cancer and other gynaecological conditions.

Her concerns were shared by Judy Makira, the organiser of the medical camp who said that many women approached her, enquiring whether the camp was offering gynaecological services.

“This shows that women want to open up to a fellow woman which is not always possible in our hospitals,” she said.

Makira, who organised the camp as a way of giving back to her home area, said she will lobby for funds to organise a camp that will screen and treat women.

Makira, a co-founder of Centre for Women Empowerment in Technology, urged residents to ensure they register with National Health Insurance Fund to make it possible for them to access health care.

“Most of the people I have talked to did not have NHIF and did not see the need for it,” she said.

The camp treated more than 1,000 people with the partnership of the county and People’s Health Movement.

She appealed to residents to seek health services when they fall ill in order to improve the quality of their lives.

“When you feel unwell, do not wait for it to get serious. Go have it checked early enough so you can live a good life," Makira said.

"Some of the patients we have handled today have surprised us because they had illnesses that had progressed too much.”

John King’ori, another beneficiary, called upon youthful men to make it a habit to seek treatment when they fall ill.

King’ori said many men ignore their conditions until they fall too ill, ending up losing their lives prematurely or overstaying in hospitals.

He said that such free medical camps are only utilised by the elderly women while men shun them despite their poor health status.

“Men need to know that a body is like a car and needs regular servicing,” King’ori said.

Rose Wanjugu, the lead doctor at the camp, said they took the advantage of the camp to vaccinate locals against Covid-19.

They also demonstrated to women how to conduct self-examination for breast cancer and how to look out for its symptoms.

“Some of the women have been to the county referral hospital for mammograms,” the doctor said.