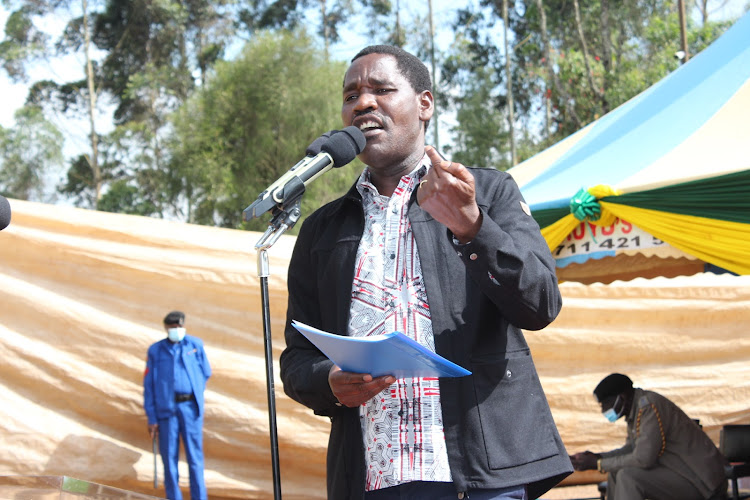 The members had complained that they were not informed when the Commissioner of Co-operatives appointed liquidators to wind up the co-operative society that was formed in 1964.

They further complained that the liquidators Peter Wanjohi and Suleiman Wandati, have been demanding money from them to help solve their complaints.

It was however not clear what the money was intended for as the liquidators had not called for a members’ meeting before imposing the charges.

The co-operative society petitioned the National Assembly through Woman Rep Sabina Chege, to have the process of issuance of tittle deeds completed before the society could be winded up.

It's officials also wanted the committee of Lands to compel the Commissioner of Co-operatives to withdraw the liquidators.

The co-operative was formed with the aim of engaging in coffee farming and cattle rearing and owns two farms in Murang’a county including Kabuku estate that is 500 acres and 200-acre Santamore estate.

It also owns a plantation in Kilifi that has 4,167 acres and the three farms have been subdivided in equal portions to all the 2,041 shareholders.

Members who were allocated land in Kilifi have however been unable to settle on them after they were evicted in 1992 during political clashes.

The committee however observed that the issues raised in the petition were pending before the Court of Appeal in a case filed by the petitioners last year.

In May this year, the committee chaired by Kitui South MP Rachael Nyamai ruled that the shareholders should exhaust the judicial process before it could intervene.

But Munya who met the shareholders on Friday assured them that they would not lose their property and that the process would be undertaken in transparency.

He said the ministry will deploy a team of auditors to audit the co-operative and establish the original register of shareholders, and draw a comprehensive report.

“The auditors will work with three shareholders and will have to complete the audit in two weeks,” Munya said, adding that members did not have an issue with the liquidation but how it was being undertaken.

“They should have been called for a meeting before the process was started,” he added.

Munya said the liquidation process will be halted until the audit is done and that when it is finally done, it will be completed fast.

“Liquidation should not take decades. Nowadays, liquidators have become like morticians. They are sent to revive businesses so people can get assets, but they bury them instead,” he said.

He said most of the original shareholders have died and their children have grown old as they wait for the process.

While the audit is ongoing, the co-operative’s offices will be taken over by the county commissioner’s office for security purposes.

A surveyor that has been working with the co-operative society has also been stopped and investigations launched on how he was contracted.

Chege said the land in Kilifi was taken over by the government when their owners fled and that the Lands committee is ready to compensate them once the co-operative’s issues are resolved.

“These people contributed money to buy the farms so genuine owners should get what they deserve,” the MP said.

John Mburu, one of the affected, said they are hopeful that they will finally get their land ownership documents after government's intervention.

He said the charges imposed were too high and that many members could not afford to pay.

Area MCA Amos Murigi said the government’s intervention may have averted a bloody situation such as the one experienced in Kihiu Mwiri land buying company, where scores of directors were murdered until the government took over a few years ago and issued title deeds.

“When the liquidation committee is finally formed, let shareholders be involved,” Murigi said.

Many tea factories have recorded a reduction of Sh2 to Sh1 in their payments compared to last year
News
3 months ago
by ALICE WAITHERA Correspondent, Murang'a
Central
14 November 2021 - 22:00