More than 200,000 children have hearing impairments, only 10 per cent are enrolled in school

• Parents are often in denial about deafness and consequent problems of speech development. They delay taking children to school.

I CAN HEAR: A student with a newly fitted hearing aid at Murang'a School for the Deaf
Image: ALICE WAITHERA

As the world celebrated Global Sign Language Day, many hearing-impaired children are still stigmatised and miss out n education.

They are left out despite progress made in recognising that most deaf children are otherwise normal and can attend school and do productive work, not just woodworking and cleaning.

Global Day of Sign Languages was marked worldwide on Thursday.

More than 200,000 Kenyan  children are living with a hearing disability but only about 10 per cent are in school.

Kenya has 120 schools for deaf children, including 23 secondary schools.

Hearing loss can affect speech and language skills. Hearing problems mean the areas of the brain used for communication may not develop as they should. Understanding and speaking are difficult.

Parents of deaf or hearing-impaired children have described frustration and discrimination by society making it difficult for children to integrate with their peers.

There are still myths and superstitions about disabled people and many parents still keep such children hidden and out of school. Some people believe disability is a curse or punishment for parents' misdeeds.

Parent Geoffrey Wathigo told the Star it's difficult bringing up a child with a hearing impairment that affects speech.

He said he was confused when he realised his son was deaf and couldn't respond to him. The child, now age 44, is normal in every other way but could not speak long after his age-mates could. 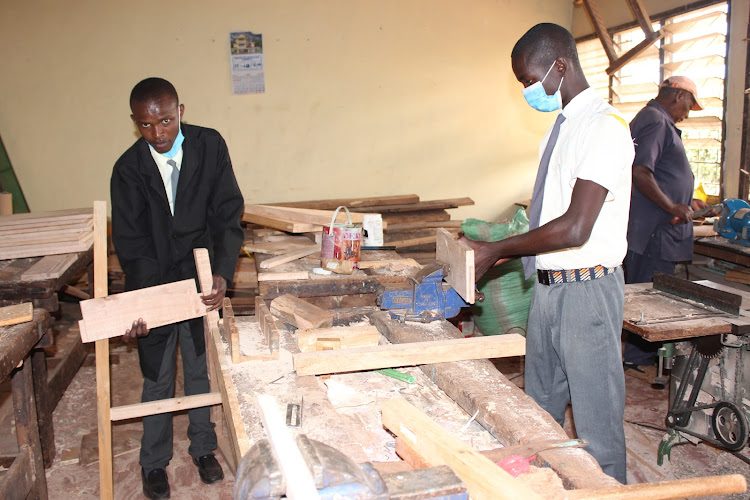 CARPENTRY: Students in a workshop at Murang'a School for the Deaf.
Image: ALICE WAITHERA

“Having a deaf child is a major frustration. You wait for him to speak after other children do, but he doesn't.

"Neighbours start whispering that he's late. You go back and forth, almost pushed to witchcraft, save for the fact you're a Christian," Wathigo said with a chuckle.

Eventually he took his child for testing and he was diagnosed with profound deafness from birth, a total lack of sound detection.

Wathigo enrolled his son in  Kerugoya School for the Deaf and Blind.

Today he is a computer engineer and the father of two children.

The daunting journey motivated Wathigo to advocate for deaf children, and he joined the National Council for Persons with Disability.

As a council member, Wathigo lobbied for disability cards for all deaf children to help them identify themselves.

He is now chairman of the Kenya Association of Parents of the Deaf.

In the 70s and and 80s, Wathigo said, deaf boys were directed towards carpentry, while girls encouraged to do domestic work.

He said deaf people are capable so much more. Today, deaf children can learn and be examined like others.

Universities such as Maseno, Moi, Kenyatta and Embu universities have interpreters and deaf students can enrol.

“We are now lobbying to have a university for the deaf,” Wathigo said.

His organisation is seeking funds to train parents in basic sign language. Members realised many children hesitate to go home for holidays as they are unable to interact with their parents and neighbourhood peers.

“Their friends are in school. If schools close for a month, their communication is cut off. With the support of donors, we have covered half the schools countrywide and many parents are able to sign,” he added.

The main challenge has been work. The government and some private organisations are now employing hearing-impaired people.

Francis Ng’ang’a of the Kenya Society For Deaf Children said all parents with hearing-impaired children should enrol them in school, regardless of their financial status. 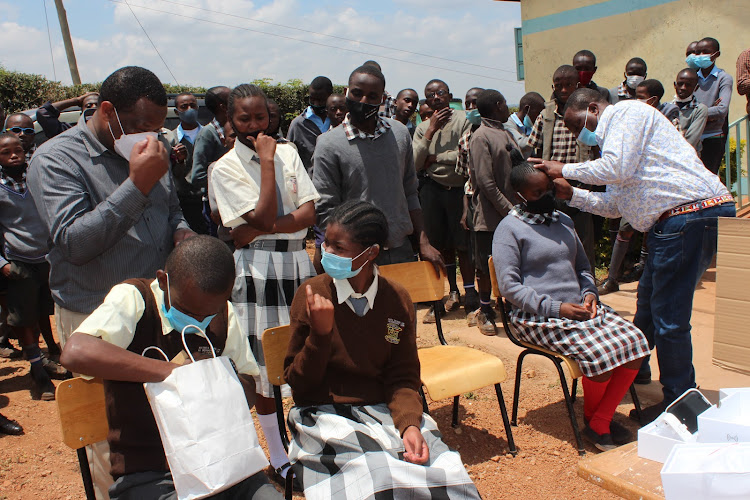 The society can fully sponsor children from disadvantaged families as every child has a right to education.

He urged the government to task administrators to identify and punish parents who fail to take their disabled children to school.

He spoke at Murang'a School for the Deaf where 120 hearing aids were issued to 60 children.

Earlier, children's ear impressions were taken to ensure the aids were custom-made.

"If look around , you see beautiful children who are well taken care of. Why would a parent not enrol a child?" He asked.

Though it is the government's role to educate all children, the society has assumed a huge national responsibility to monitor and support deaf children.

Rhoda Kabiti, a director at the society, said they have been supplying hearing aids to all schools for the deaf on behalf of the Kenya Institute of Curriculum Development. The project is sponsored by the World Bank.

Principal Charity Wanjiku of the Murang'a School for the Deaf, has been teaching deaf children for more than 20 years. When she first joined, it had only 35 students, today it has more than 300

The school originally was dilapidated and had to be renovated with help from the government and Kenya Society for Deaf Children..

Wanjiku said many parents go through a phase of denial after realising their children are deaf. Some delay enrolling them in school as they wait for them to start hearing. 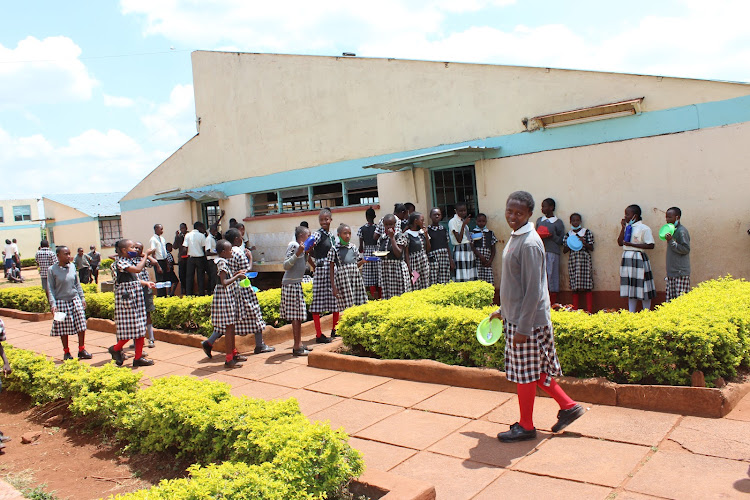 SCHOOL: Children during their lunch break at Murang'a School for the Deaf..
Image: ALICE WAITHERA

In time, most accept the situation and take basic sign language lessons so they can communicate with their children.

The school also organises counselling and guidance meetings for new parents. The first five years are the most difficult.

"Most children come very frustrated because of their inability to communicate. This must be addressed first," Wanjikiu said.

But with many joining school late, teachers face the challenges of children maturing in school, while their peers are in university.

"In time, advocacy has helped enrol children at the right age and the over-aged ones are getting phased out," Wanjiku said.

"It's challenging. Many have to wait until schools open so they can talk to their teachers about issues at home over the holidays. Other times, I visit homes and talk to children and their parents."

The Competency-Based Curriculum is a reprieve for deaf children as they have a chance to focus on studies that give them life skills.

Many are unable to fully engage in academics but excel in arts. This is because some ailments that cause deafness affect the brain and its capacity to store information.

"Sometimes you force them to be in class and you can see early on that some have a low academic ability. But we are no able to focus on other abilities such as carpentry, painting and beauty within school," Wanjiku said.

The school has a workshop, barbershop and hopes to open a beauty salon.

The school needs funds to buy water tanks to boost storage and reduce bills. It need to contract an extra dormitory and an ablution block.

Hearing loss on the rise, WHO warns

Kwale to support children with special needs through bursaries 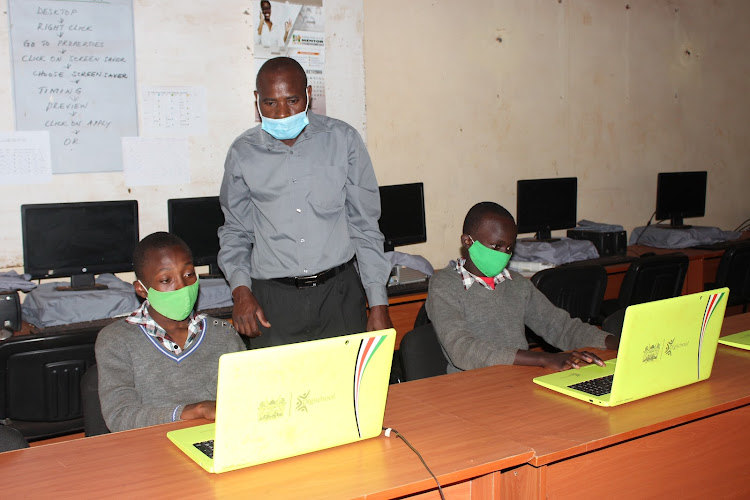