There is huge potential in agro-processing of fruits, vegetables, dairy, animal feeds

• Kenya's population is rising and the disposable incomes offersa ready market for the locally processed products.

• Nyoro says consumers are getting more sophisticated and this is opening up new markets for products such as bacon, beef and untraditional teas like the purple tea. 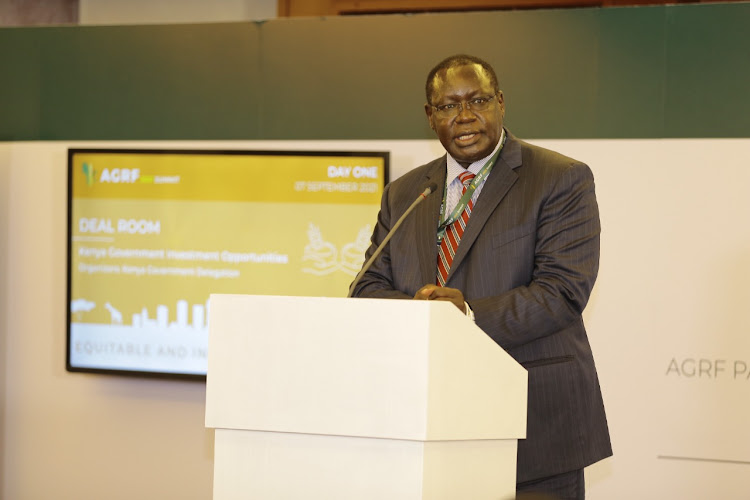 Kiambu Governor James Nyoro has called for investment in food processing, adding that there is huge potential in the value chain.

He said there are opportunities to invest and enhance production in the country because the gap between consumption and production is huge.

Nyoro,who is the Council of Governor’s Agriculture Committee chairman, said the biggest opportunity at the counties lies in processing.

He spoke on Wednesday during the 2021 Africa Green Revolution forum in Nairobi.

Data from the food processing industry in Kenya points out opportunities for small-scale investments in the processing sector.

“The population of Kenya is rising and disposable incomes make it clear that there is ready market locally for processed products.

"This means that raw material for most of these small-scale food processing businesses can be sourced locally,” data showed.

Nyoro said some counties have started identifying areas of potential but so far the investment already done is through public resources.

“For example, Makueini county has invested in a fruit processing plant, but this is largely driven by the public fund.

"We are looking at fruits and vegetables processing by the private sector across the 47 counties,” Nyoro said.

Nyoro said there is huge potential for agro-processing of mangoes and pineapples in Kiambu county and that some private investors have come in.

He said there is also potential on banana processing in Murang’a county which can help reduce post-harvest losses.

The food security expert said dairy processing and animal feed production offers another great opportunity that counties can explore so as to have high yielding animals feeding on quality feeds.

“Kiambu is largest dairy producing county. We have some investments done by the cooperatives, one the shining examples being the Githunguri Dairy with an annual turnover of Sh8 billion distributed across 22,000 farmers.

The governor said the country has largely been dependent on raw milk consumption, but this is shifting through regulation and market trends.

“Another area is ensuring quality animals feeds and this has both forward and backward linkages.

"Forward linkage in terms of processing of high quality animal feeds, while backward linkage is how to invest in raw materials that go to dairy production for instance production of soya to reduce competition on white maize,” he said.

“We are the only continent where animals and human beings compete for the same food-maize.

"Maize goes either for human consumption or to animal feed production. There is potential to move to non-maize source of carbohydrates like cassava.

"We can also scale up production of other sources of proteins for animal feed production like the black soldier fly,” he said, adding that the demand for the BSF from millers is as high as a million tons per month.

Nyoro further added that as consumers get more sophisticated, particularly around big cities like Nairobi, other markets like bacon production are opening up.

“We have some private sector doing bacon production and processing but we feel there is huge potential for investment.

"Meat processing is another area with huge potential in the Arid and Semi-Arid regions like Isiolo, Garissa and Marsbit counties.

"We need to invest in meat processing so that we stop moving animals from these areas to the urban centers but instead move processed beef to the market.

"Another huge potential that we are exploring is the production and the processing of herbs for domestic and export markets,” he said.

The agriculture committee chairman said counties have gotten together to form Economic Blocs. We have a proposal to establish earthy cities.

“This is a place where we can bring in all these processing units in a central place and only sell to the market finished products.

"This will minimise the transport cost and make the products more affordable to consumers,” Nyoro said.

The new plant is expected to employ over 1,000 residents n the region
Counties
3 weeks ago