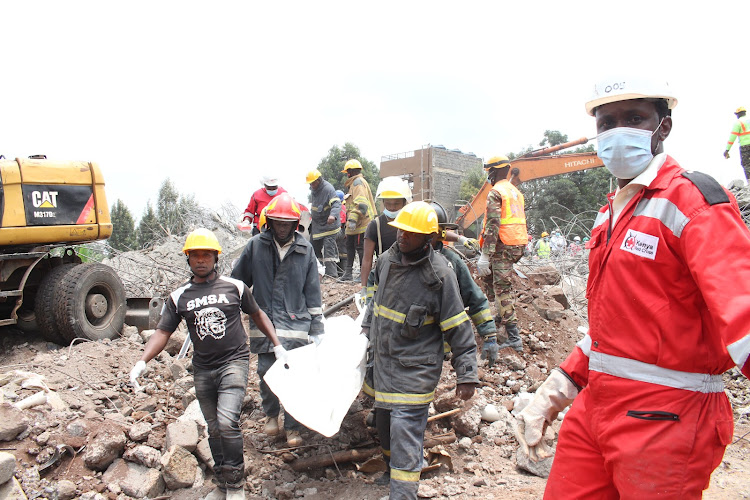 A body is retrieved from rubbles of the collapsed building in Gachie, Kiambu county on Tuesday.
Image: ANDREW KASUKU

Felix Otieno worked as a casual construction worker at the collapsed Gachie building up to Saturday. But on Monday, he did not show up.

He told his colleagues Dorine and Josephat Mwangi that he was exhausted and needed a rest so he could resume on Tuesday.

At around 2.45pm on Monday, he heard some commotion and noise at the construction site in Kihara area and when he went there, the five storey building had sunk and collapsed.

As the rescue operations continued on its second day on Tuesday, Dorine and Josephat's bodies were retrieved from the pile of rubbles. Unknown number of people remain trapped.

A shaken Otieno, 23, told the Star that he missed the tragedy by a whisker and that had "I come to work on Monday, I may have been the third body carried in that white body bag."

"It is so sad that Dorine and Mwangi are forever gone, just like that. I thank God that because of the exhaustion and the body pains that made me to rest on Monday saved my life," Otieno said.

Dorine is said to have been a painter while Josephat was an electrician working on the lower floors whose finishing works were going on.

The death of the two raises the toll from the disaster to three after one man succumbed to his injuries at the KU hospital. He was among the 10 that had been rescued.

Seven of the 10 were discharged after their minor injuries got treated. Two remain hospitalised.

Moses Muigai had the same tale. He was on duty on the fateful day, leading a team of welders. At lunch time when power supply went off, together with his team of seven, they went for lunch at a nearby makeshift hotel.

As his team went back to the site after the meals, Muigai remained to take some water. Few minutes later, he heard a commotion. The building was going down.

He said his team were at the top most floor as the structure collapsed. Three of them escaped safely. Four remained unaccounted for as of Monday evening.

"See how lucky I was. Perhaps I would have been part of the statistics," Muigai said.

James Macharia, another worker at the site said the foundation of the building was just four feet deep and that it was bending on one side. 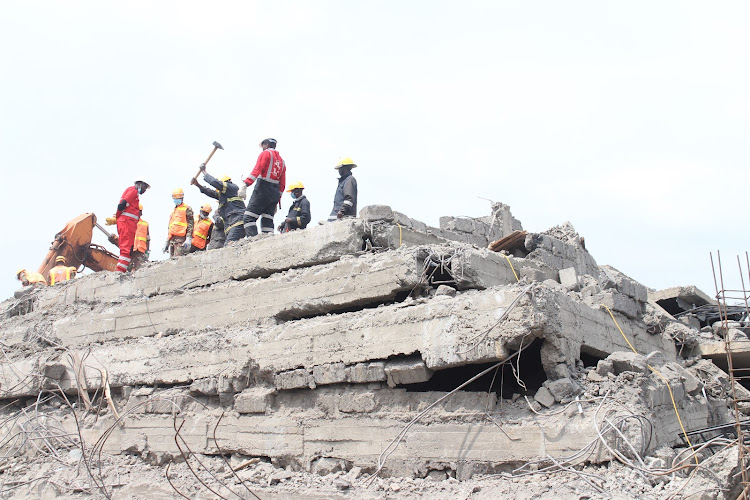 Rescuers search through rubble for survivors in the collapsed building in Gachie on Tuesday.
Image: ANDREW KASUKU

Concrete slab was being put on the fifth floor as construction and finishing works on the other floor went on. Plumbers, electricians, steel workers and painters were all working on the lower floors in what seemed to be racing against time to complete the residential structure.

Construction of the building started in February this year.

National Construction Authority executive director Maurice Akech, who was at the site on Tuesday, told the Star that his entity had issued an order stopping the construction in July but the owners ignored the order.

When his officers visited the site, he said, there was no evidence of construction permit, safety measures, certification and licensing of the construction workers and the foreman.

"Even the construction sign post showing the details of the project were missing. We are now doing further investigation together with the police to bring the culprits to book," Akech said.

Police say the owner of the building, known as Michael Mbugua, is an Office of the President operative. He remained at large as of Tuesday.

On Monday, a DCI detective detailed on the case said initial phone signals of Mbugua indicated he was in Kiambu town, a second one showed he was heading towards Ruiru.

"We are in pursuit. We will have him soon for questioning and hold those responsible accountable," Kiambu county police commander Ali Nunu said.