10m Kenyans should have Covid-19 jabs by December - ministry

•Kenya further expects to receive 1,760,000 doses of Pfizer from the US government this month.

•The Covax facility has further allocated Kenya another 271,440 doses of Pfizer, whose delivery will also start this month. 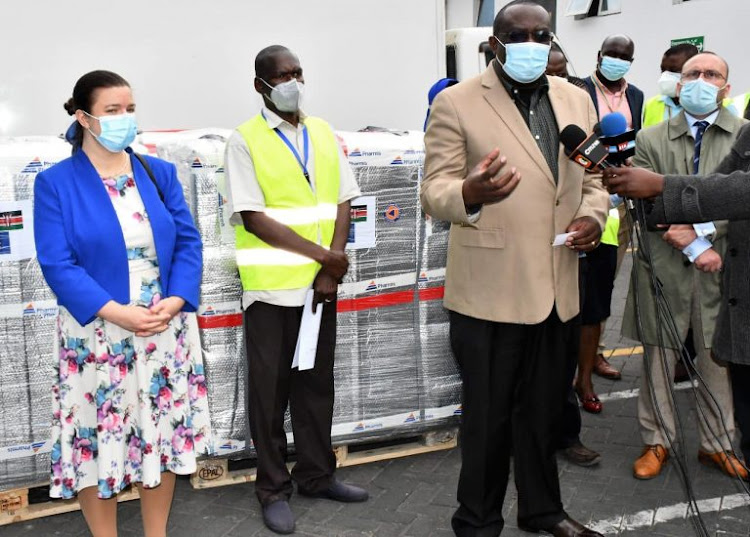 Kenya aims to fully vaccinate 10 million people against Covid-19 by the end of this year, the Ministry of Health has said.

The country has so far received 2.3 million doses of the AstraZeneca vaccine, after multiple donations made in the last two weeks.

By Saturday, the country had administered 1.7 million doses and only 554,000 remained in stores around the country.

However, the ministry said there is no cause for panic as more vaccines are expected this month.

“Our capacity for vaccine deployment remains very robust, but as is now common knowledge, our efforts have been greatly affected by supply constraints,” Health CAS Mercy Mwangangi said.

Kenya further expects to receive 1,760,000 doses of Pfizer from the US government this month.

The Covax facility has further allocated Kenya another 271,440 doses of Pfizer, whose delivery will also start this month.

“We have given emergency use approval for Johnson & Johnson and Pfizer Covid-19 vaccines,” Pharmacy and Poisons Board boss Fred Siyoi said.

"With the ongoing high positivity rate and correlating to experience with delta wave in other countries, this fourth wave will soon surge above the third wave peak of March 2021," he said.

Kenya has the 28th highest uptake of vaccines in Africa, having fully vaccinated 2.5 per cent of its population, compared to the 1.5 per cent continental average.

According to the World Health Organization, vaccine shipments to Africa are rapidly ramping up from multiple sources after a near-halt to deliveries in recent months.

In total, almost 79 million Covid-19 vaccine doses have arrived in Africa and 21 million people, or just 1.6 per cent of Africa’s population, are fully vaccinated.

To fully vaccinate 30 per cent of Africa’s population by the end of 2021, the continent needs up to 820 million doses, considering a two-dose schedule.

“There’s light at the end of the tunnel on vaccine deliveries to Africa, but it must not be snuffed out again. I urge all countries with surplus doses to urgently share more in the spirit of life-saving solidarity and enlightened self-interest, because no country is safe until all countries are safe. I urge African countries to gear up and get ready, as our drought is finally ending,” WHO regional director for Africa Dr Matshidiso Moeti said.

Covax and the World Bank are set to further boost vaccine supply for developing countries through a new cost-sharing arrangement that allows low-income countries to purchase doses beyond the fully donor-subsidised doses they are already receiving from Covax.

Currently, the delta variant is driving infections across the country.

Post a comment
WATCH: The latest videos from the Star
by JOHN MUCHANGI Science Editor
Central
08 August 2021 - 23:00
Read The E-Paper