• Governor Mwangi Wa Iria said it is time for Kenyans to do away with stereotypes that cause disunity amongst them.

• Wa Iria said Kenyans should elect leaders based on their track record regardless of their ethnic background. 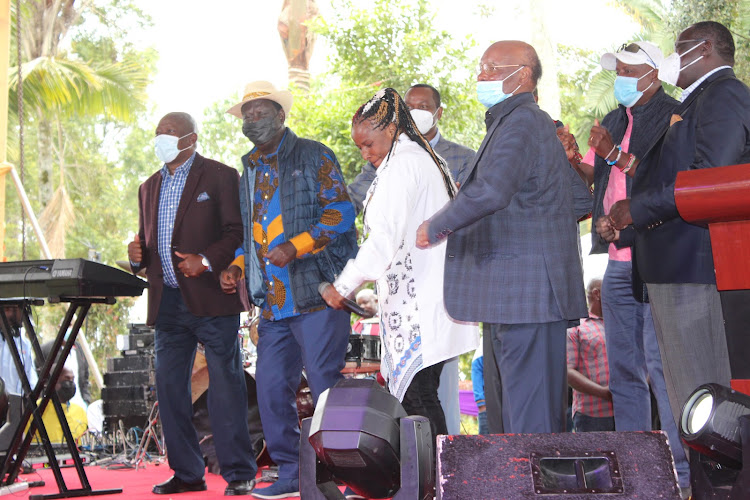 A section of politicians from Mt Kenya leaders have welcomed ODM leader Raila Odinga into the region to seek support for his presidential bid.

The leaders lauded Raila as one of the leaders who fought for democracy, adding he deserves to take over the mantle.

The leaders spoke at the home of Royal Media Services chairperson SK Macharia in Gatanga on Tuesday.

They said Raila had consistently supported the region and that it is time for the politics of fear and hatred to be vanquished.

Former Gatanga MP Peter Kenneth underscored the need for Raila to schedule consistent visits to familiarise himself with the region.

Such visits, Kenneth said, would give locals an opportunity to establish what kind of a leader Raila is and help them to make decisions that are devoid of misinformation.

"Sometimes, just come and spend time with our people, attend local churches. Let people see you and decide for themselves what sort of a leader you are," he said.

Kenneth further noted that the most important thing for the region is to ensure its interests are secured.

"Politics is about politics. We will see where our people will benefit most from, whether it is tea, coffee or milk so that farmers are empowered,” he added.

Kenneth noted that it is impossible for a leader to run a campaign based on issuing free money "unless the funds are fraudulently acquired".

He said the only way to ensure government resources trickle down to Kenyans in the grassroots is to increase the funds allocated for devolution.

The comment appeared to be a veiled jibe against Deputy President William Ruto, who is known to give generous donations to churches and has supported several youth activities with his hustler narrative.

Governor Mwangi Wa Iria said it is time for Kenyans to do away with stereotypes that cause disunity amongst them.

Wa Iria said Kenyans should elect leaders based on their track record regardless of their ethnic background.

"Time has gone to continue with stereotypes and saying the country cannot be ruled by certain communities," he said.

He said if devolution is well managed, it would reduce conflicts over leadership as it would ensure equitable distribution of resources.

"What we need in the country is equitable distribution of resources then Kenyans will no longer fight for positions. It will no longer matter who becomes the President," he added.

He said the handshake’s agenda to boost the manufacturing industry will create more opportunities for Kenyans and boost the economy.

Machakos Governor Alfred Mutua said it is time for Kenyans to shed tribalism, saying no one votes to be born into a certain community.

“We should resist any leader who attempts to take us back to our tribal cocoons,” he said while praising Raila for his support for industrialization.

“Like him or not, you have to admire Raila’s purpose and stand. He doesn’t change his focus. That is something to be admired,” he added.

Mutua and Wa iria have declared their aspirations to vie for the presidency on their individual parties Mendeleo Chap Chap and Usawa kwa Wote respectively.

Kirinyaga Governor Anne Waiguru said those who have declared their interest for the seat should know that the region will vote in accordance to the guidance of President Uhuru Kenyatta.

She said despite the visible divisions facing the region, it always votes as a block during elections.

"Those who have come out to vie for presidency should know the region goes to one direction during elections, people eat but on that day, we will follow the direction given by the President in accordance to the handshake," Waiguru said.

“We cannot forget how Raila has suffered for the sake of the country. He was detained for close to a decade. The democracy we are enjoying right now came about because people like Raila were on the fore front fighting for it,” Kamanda said.

Raila: How I will transform, modernise civil service