Gatanga family in the dark about daughter in Gulf

Beatrice Waruguru left the country in February, her family has not heard from her since March 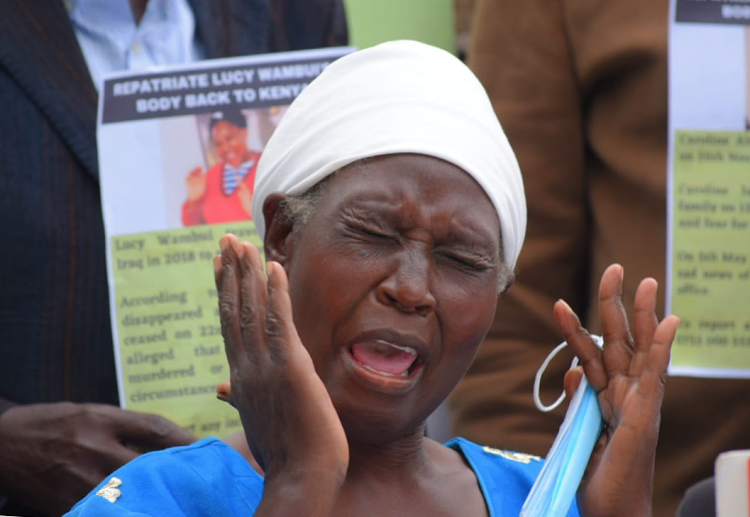 A family in Gatanga, Murang'a county, is in distress over four months of chilling silence from their daughter Beatrice Waruguru, 30.

Waruguru left her Gatanga home on February 22 to secure a job in Saudi Arabia, linked by a local agency.

A month later she talked to her cousin James expressing fear for her life.

This loosely translates to her being beaten and burnt by an iron everyday.

After a week, James could not reach the employer again. He had been blocked.

“I think her boss realised she had been communicating with me and blocked me,” James said.

The family did not know that was their last communication with her. The number she used has since been unreachable.

The Star contacted an agent from the agency who said the family should wait to receive Waruguru, either alive or dead.

“I don’t know if Waruguru is alive or dead, the family should wait. It’s only the Ministry of Foreign Affairs that’s supposed to give the information,” the agent said.

Attempts by the family to get Waruguru back have been futile.

The agency asked the family to raise Sh100,000 for Waruguru’s return ticket.

The family’s effort to reach the agency for help has been met with insults and threats from their sub-agent.

According to the National Employment Authority Foreign Recruitment regulations, in case a worker undergoes any form of distress, they should reach the family, home agent or visit the Saudi Embassy.

The home agency (Nadescol Agency) received a call from the Saudi Arabian Embassy informing them of Waruguru’s woes.

However, the agent could not help because they claim her two-year contract is ongoing.

“When Waruguru went there, she signed a two-year contract, inclusive of a travel and return ticket that only becomes valid once the contract is completed,” the agent said.

"I don’t know how to help Waruguru. Her family will have to pay for her return ticket, if they want her back,” the agent added.

According to the immigrant workers regulations, domestic service workers (cleaning persons, house drivers, and gardeners) or workers on a short-term work visa are not covered by the provisions of the labour laws.

Labour laws are meant to protect employees' rights and set forth employers' obligations and responsibilities.

Kenyan women who leave the country to offer domestic service have not been covered under the labor laws.

Since 2019, about one hundred Kenyans working in the Gulf states have lost their lives under mysterious circumstances.

Out of 11 million migrant workers in Saudi Arabia, 55,000 are Kenyans.
News
3 years ago

Family seeks help to bring back woman trapped in Saudi

Francina Magati, left Kenya in September 2019 for greener pastures in Dammam, Saudi Arabia, as a domestic worker.
Counties
1 year ago

A Mombasa family says their daughter is tortured,enslaved in Saudi Arabia.
News
2 years ago
Post a comment
WATCH: The latest videos from the Star
by LAURA SHATUMA
Central
27 July 2021 - 06:20
Read The E-Paper