• Governor Francis Kimemia said the two natural resources are vital to the county and beyond because besides providing water to the other counties with some of it flows all the way to Indian Ocean replenishing the communities downstream. 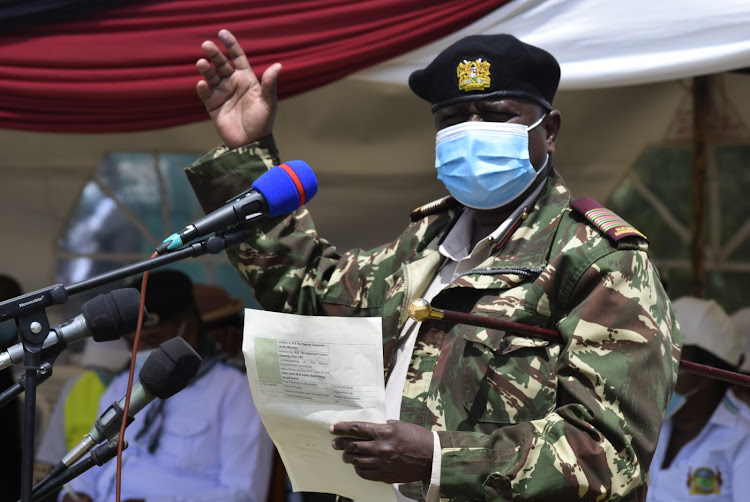 He said errant officers, some of whom had overstayed in their respective stations, had been abetting deforestation of the two vital water catchments.

The administrator warned the complacent officers of prosecution among other disciplinary actions for allowing forest plunder.

Speaking at Ol-Jororok during the World Environment Day celebrations organized by Nyandarua County Government in collaboration with Equity Bank last Friday, he observed logging activities were rampant in Aberdare and Ndaragwa forests yet there were officers assigned to protect them.

More than 3,000 trees were planted at the Nyakanja water springs in Nyakariang’a village in Ol-Jororok sub county during the event.

Leparmorijo noted that destruction of two catchments cause water shortage and suffering in Nyandarua and beyond.

“These are public servants who fail to do their work, an offence is categorised in two phases, either an act of commission or omission and they both call for discipline,” he said.

Leparmorijo said those found culpable would be dealt with severely in accordance to the law.

The County Commissioner who was accompanied by Governor Francis Kimemia among other senior officials at the county, said those who have overstayed in the county would be transferred to stop further destruction.

Kimemia said the county was a source of water to other counties such as Nairobi, Nakuru and Wajir in North Eastern region.

“The two natural resources are vital to the county and beyond because besides providing water to the other counties, some of it flows all the way to Indian Ocean replenishing the communities downstream,” he said.

The governor urged residents to plant more trees especially on bare river lines saying the trees would not only benefit them but also increase the country's forest cover.

He said the bank was investing in tree planting as it way of helping increase Kenya’s desired forest cover of 10.5 per cent of here land mass.

Conservationists oppose plans to hive off Aberdare Forest for town

It is unreasonable to encourage farming at the expense of forests; they increase crop yields.
Opinion
1 year ago
by LOISE MACHARIA
Central
06 June 2021 - 18:50