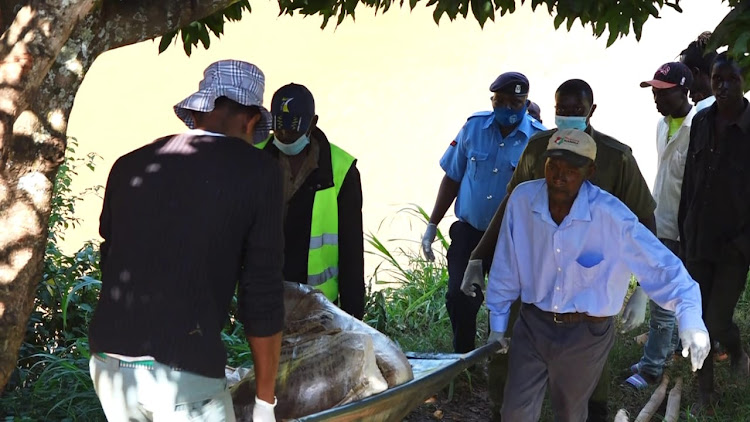 A body is carried away from river Mathioya last week.
Image: Alice Waithera

In the last two weeks, Murang’a county has been in the limelight after a body belonging to one of the four men who disappeared from Kitengela last month was found in river Mathioya.

The body belonging to Elijah Obuong was found in a gunny bag dumped in river Mukungai in Kangema on April 20 just a day after he and his friends went missing.

On April 29, his family positively identified his body saying he had inscribed the word ‘Elly’ on one of his hands.

The family said the body was still fresh when they identified it which eased the process.

A post mortem conducted on the body indicated that Obuong was hit with a blunt object on the head.

The exercise done by pathologist Dr Kamotho Watenga indicated the body had a blood clot in his head consistent with a blunt force trauma.

Just days after Obuong’s body was recovered, another body was retrieved from river Mathioya, stuffed in a gunny bag. The body was discovered by sand harvesters who then notified security officers.

The recovered body had part of the hands cut off. And now residents are expressing concerns that the area has become a dumping site for bodies.

Francis Muriuki, a harvester said about five bodies had been retrieved from the river and that none were locally identified. He said this indicated that they were all transported to the area.

One of the bodies has been claimed by a family from Rongai area in Nakuru who visited Murang’a county mortuary and identified the body as belonging to 30-year-old Michael Kimani on May 3.

His wife Naomi Wariara said the deceased left their home in Umoja estate in Nairobi never to return. His mobile phone was switched off.

The family expressed shock at the manner in which Kimani was murdered saying it seemed he had been tortured.

On May 2, the family of Jack Ochieng, one of the abducted Kitengela four friends, visited the morgue to identify a body that had been collected the previous day.

The family led by his sister Donah Ochieng however said the body did not belong to him and appealed to the government to help find him.

Donah said the disappearance was weighing heavily on their parents who were ailing and refuted claims he may have been involved in criminal dealings.

The family said it had visited morgues in his search and that their efforts had bore no fruits, adding that their resources were getting diminished.

About eight unidentified bodies were being held at the mortuary after being recovered from various parts of the county on Wednesday last week.

All the bodies were male with one badly mutilated.

The County Executive Committee member for Health Joseph Mbai appealed to families with missing relatives to visit the morgue.

County criminal investigations officer Daniel Kandie however said the bodies have been identified and picked by their families.

This, he said, is including the body of a man from Kigumo who committed suicide.

“All the bodies that were believed to have been involved in murder have been identified as investigations continue,” he said. 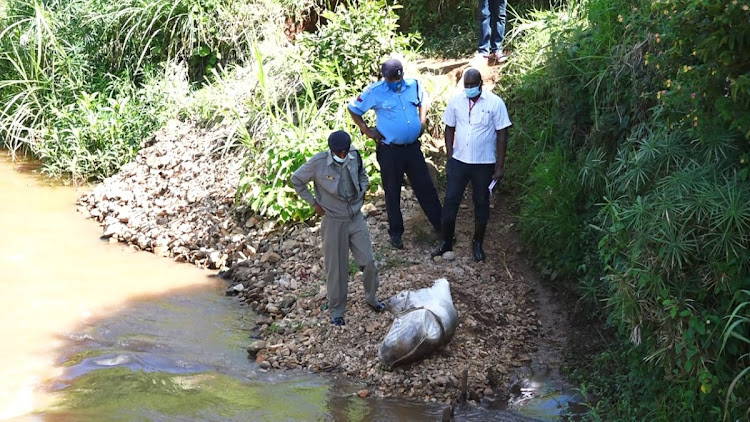 Police at Mathioya river where a body was found dumped in a gunny bag.
Image: ALICE WAITHERA
by ALICE WAITHERA Correspondent, Murang'a
Central
10 May 2021 - 05:30