Hesborn Wainaina aspires to be an aeronautical engineer and has been building aircraft models since dropping out of college.

• Wainaina dropped out of college after only one year of pursuing aeronautical engineering due to lack of fees.

• He uses locally available materials to create a variety of aircraft. 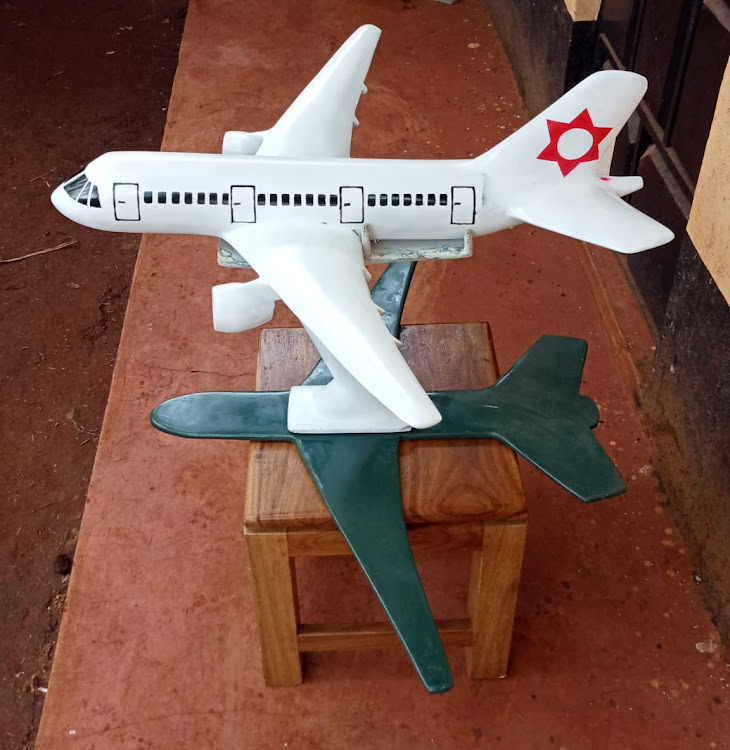 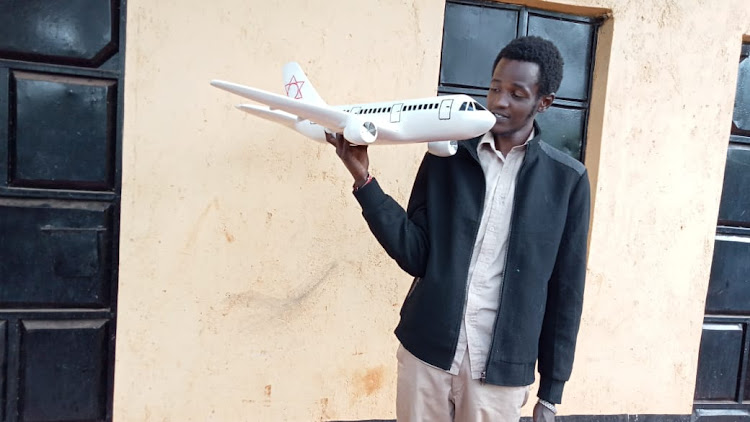 Hesbon Wainaina displays one of the aircraft he has created from his bedroom.
Image: Alice Waithera 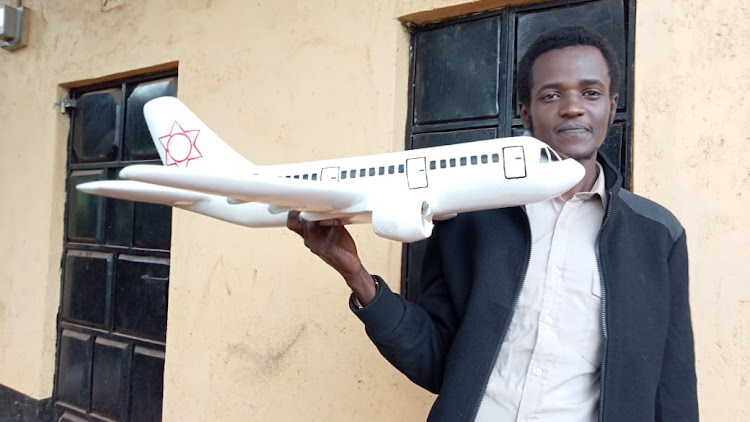 Growing up, Hesborn Wainaina had a love for aeroplanes that his family could not explain.

He plucked chicken feathers and tied them to his shoulders to see if he could fly. When that did not work, he started making paper planes and at times set their tails on fire to see if they could fly faster.

The passion for aeroplanes only intensified as he grew older. He is now 23.

After he completed his secondary school education in 2014, his dream was to study aeronautical engineering.

He scored an A-(mimus) in his KCSE exam but suffered a major setback because he had not done physics as a subject in high school. Physics is required for one to pursue an engineering course in local universities.

Three years later, in 2017, Wainaina joined a college that offered a diploma in aeronautical engineering in Nairobi.

To actualise his dream, Wainaina required about Sh200,000 in fees exclusive of his upkeep.

After only one year of study, his mother could not afford the fees anymore, and he dropped out. The family organised numerous fundraisers, but the money was not enough for him to continue with his studies.

Back home in Gaitega village, Kahuro subcounty, Wainaina liaised with his classmates, who would send him class notes.

But as his classmates secured internships after three years of study, Wainaina stayed home as he did not have a certificate.

Frustrated, he decided to use the knowledge he had gained to start making  aircraft prototypes as a way of gaining experience and keeping himself busy.

He turned his room into a workshop and started using locally available materials such as binding wire and threads used to make shoes.

The room is now littered with a variety of aircraft models, including a Boeing 777 that can fly both cargo and passengers, High Wing mostly used for training and SR71 jet.

A few residents have been contracting him to make decorative aircraft as a way of supporting his talent. He trains young people who face similar financial constraints that do not allow them to pursue their education.

Wainaina said his ultimate wish is to one day be able to raise the funds required to complete his studies and become an aircraft maintenance engineer before becoming a fully fledged aircraft engineer.

“If by some miracle I raised the funds today, I would pack my clothes overnight and go back to college tomorrow,” he said.

He said he is currently in communication with a certain college to see if his study period could be reduced because of his experience. He was, however, quick to add that he is ready to repeat the entire course.

Wainaina is not able to make profits from his work as he has to buy some of his raw materials such as fibre glass, which is expensive and only available in Nairobi.

“A single prototype has about 200 different parts that are joined together piece by piece using a shoe thread. I only do this because it is my passion and to keep myself busy,” he said.

Wainaina hopes to be able to invest more in aircraft making and acquire a drone making licence. Drones, he said, have the potential to make farming easier and transform the agriculture sector.

He plans to open a foundation that will help those with a passion for aviation and create a platform that they can use to access the sector and launch their careers.

His mother, Charity Muthoni, said she was surprised that his passion did not dissipate as he grew up and regretted being unable to raise enough money to take him through college.

She appealed to well-wishers to support her son, saying she has exhausted all her options.