Lobby calls for dialogue to save pastoralism in Laikipia

Over 50 people have been killed, many others maimed while hundreds displaced

• During drought, pastoralists from Samburu, Isiolo and Baringo drive their animals to private farms, ranches and wildlife conservations in Laikipia in a desperate search for pasture and water.

• Security forces are deployed by the government to protect property leading to a bloody confrontation where the lives of both people and animals are lost. 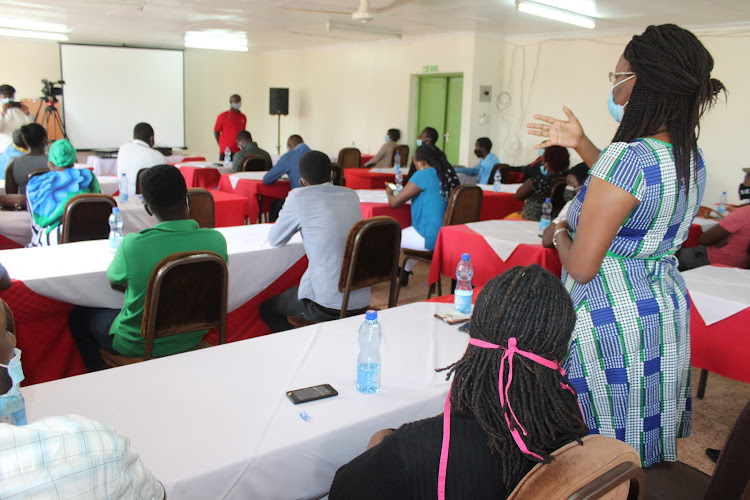 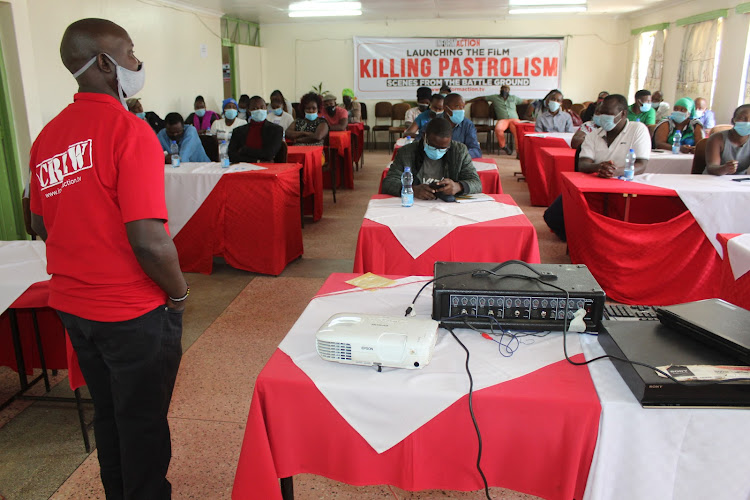 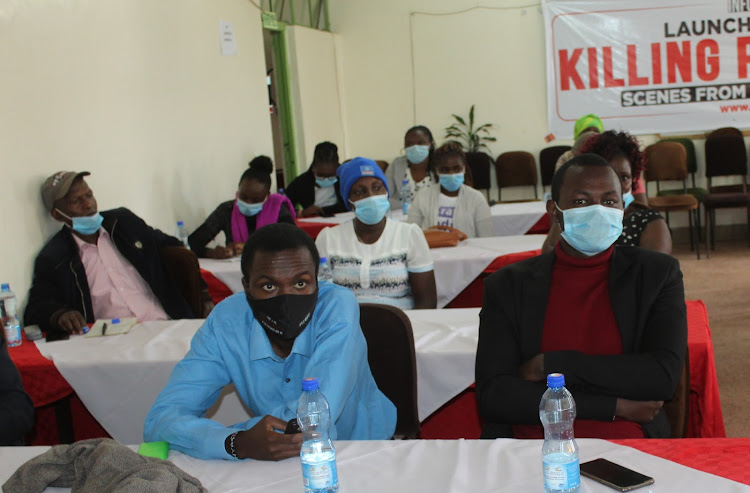 Some Nyeri residents watch the film at Ibis Hotel in Nyeri on Wednesday
Image: EUTYCAS MUCHIRI

The government, pastoralists, conservancy owners and farmers have been urged to engage in dialogue and explore ways of saving pastoralism.

Nyeri residents spoke after viewing a film entitled “Killing Pastoralism, Scene from the Battle Ground” prepared by InformAction. The human rights organisation screened the film during its launch in Nyeri.

The film depicted the history of human-wildlife conflict and the fading of pastoralist activities due to diminishing land resources, pasture and water points.

“The launching in Nyeri was by design because the effects of the conflict in Laikipia have their own negative impact in Nyeri and Laikipia like the proliferation of guns and the influx of pastoralists in some areas where farming communities do farming,” Samuel Wandimi of InformAction.

Wandimi said they wanted to hear the views of Nyeri people on the adverse effects of killing pastoralism and proposed solutions to the problem.

Some argued that it is time pastoralists changed and ventured into other economic activities while others felt that would mean killing their way of life.

There should be sustainable use of land as Kenya needs both conservancies and pastoralism, others claimed.

“It should be noted that since time immemorial, pastoralists and world life have lived together. So you may need to do conservation but that should not impact negatively to the livelihoods of pastoralists and more so infringing on their human rights,” Wandimi said.

InformAction will get the views of the pastoralists and solutions they think may help sustain the economic activity.

They will be targeting mostly Laikipia and the larger Northern Kenya region where there have been conflicts between wildlife, pastoralists, conservancy owners and farmers.

The views collected may inform a petition to leaders on how the issues can be solved using homegrown solutions, he said.

Asha Muktar, a field director with InformAction covering Samburu, Isiolo, Meru and Laikipia said pastoralism is a way of life and those practising it should not be coerced to change the economic activity.

“You cannot tell them to sell their animals while you are not telling conservancy owners or farmers to sell their land and venture in other things,” she said.

The killing of pastoralism may lead to conflicts, with pastoralists invading ranches to graze their animals as they will have nowhere to graze them.

Michael Ndegwa, a Nyeri resident said though traditionally people in Laikipia have been pastoralists the land has been taken over by ranchers.

These activities, he said, are interfering with pastoralists as they are chased away by the conservancy owners or targeted by security officers protecting the conservancies.

“You will realise that the acreage for pastoralism is diminishing yet the pastoralists and their livestock are increasing,” Ndegwa said.

“If kicked out of Laikipia, then they will move to the neighbouring counties of Nyeri and Nyandarua where people are farmers.”

This will cause more conflict between farmers and pastoralists, he said.

Ndegwa said there is a need for a multidisciplinary approach where the government, pastoralists, farmers and conservancy owners are brought together to explore solutions to the problem.

It will ensure equal sharing of land resources available, he said.

The film detailed what pastoralists in Laikipia have been going through in the hands of conservancy owners.

During drought, pastoralists from Samburu, Isiolo and Baringo drive their animals to private farms, ranches and wildlife conservations in Laikipia in a desperate search for pasture and water.

Security forces are deployed by the government to protect property leading to a bloody confrontation where the lives of both people and animals are lost.

Media and human rights organisations' reports have said over 50 people have been killed, many others maimed while hundreds displaced in the conflicts

Vast areas of ancestral land are still in the hands of European settlers which they occupied during the British colonial government.

Laikipia is one of the largest counties in the country but almost 50 per cent of the is owned by large scale private ranchers and some 100,000 acres are wildlife conservancies.

Pastoralists claim they have never had peace with ranchers while ranchers claim pastoralists have been attacking them without being provoked.

Ranchers say some people take advantage of the large number of animals coming into the area to sneak in weapons to ranches and engage in poaching.

Muthoni Wanjau, another resident, also called for dialogue and conversation around diminishing resources to ensure there is sustained pastoralism.

Post a comment
WATCH: The latest videos from the Star
by EUTYCAS MUCHIRI Correspondent, Nyeri
Central
11 April 2021 - 22:00
Read The E-Paper