We are legally in office tea directors in Kiambu county say 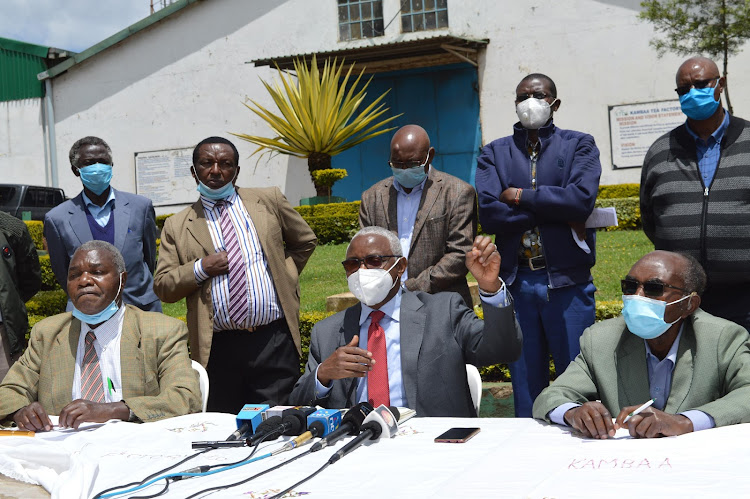 Directors from six tea factories in Kiambu have rejected the government's directive to hold elections.

They said the elections to be held on April 10 will be in violation of companies' Act, memos and articles.

The directors from Kambaa, Kagwe, Theta, Ndarugo, Gachege and Mataara tea factories spoke to the Star on Thursday.

“Elections are called through our leaf collections centres, through the factories and through the company secretariat where vetting is done and proper elections are conducted," said Joseph Wakimani director of tea zone 1.

"The current directors are legally in office.  Elections are conducted every year but now there is a court matter yet to be determined and elections have been stopped. Then there are the Covid-19 regulations that have prohibited public gatherings  until further notice.”

President Uhuru Kenyatta in March issued Executive Order No 3 of 2021 directing the newly established Tea Board of Kenya to sanction immediate elections in all tea factories to enable farmers to freely elect board members within 60 days.

Wakimani said over the years elections have attracted more than 80 per cent of registered shareholders.

“We do not know about the elections being called in playgrounds in venues that are not part of the factories' establishment and we encourage our farmers to stay put until our normal elections are called,” he said.

Wakimani said directors are ready for elections if the issues before court are addressed and a ruling made.

“Some of those pushing for elections went to court to [stop] elections from being held last November. Directors are not holding off elections, we are ready for them, but we must respect that there are matters in court holding off the elections,” he said

The elections directed by President Kenyatta are some of the tea reforms the government is trying to initiate that have met resistance from the Kenya Tea Development Agency.

Wakimani urged the government to reduce the taxes imposed on the sector as they are killing it and strengthen the Tea Board.

“The gaps hindering tea farmers from getting more money are in marketing. We have been lobbying for the Tea Board since 2014 when it was abolished to have an arm of the government that will seriously market tea,” he said.

David Chuchu, Kambaa factory chairman, said the onslaught against KTDA, an entity owned by smallholder farmers, would only harm the industry further.

“We are not opposed to reforms, but this must be done in an organised manner involving consultations to establish facts and guidelines along which any reforms may be based. We need to see figures, we need to have data as the basis for reforms,” he said.

Chuchu said dismantling KTDA is not the solution. If cases of misuse of funds have been identified, they should be dealt with at that level, he said.

"We have a legal system that can handle cases of misuse of funds. Enormous changes without basing the process on established facts will only create chaos and confusion [as happened to] coffee, pyrethrum, cotton and sisal sectors, which no longer exist because of unnecessary interference,” Chuchu said. 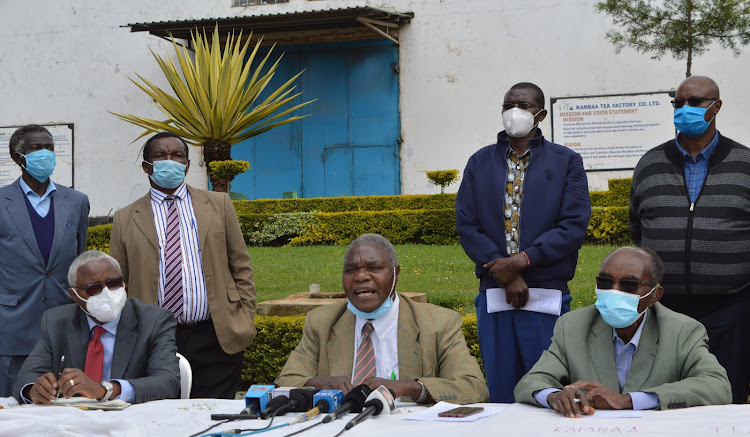 OPPOSITION: Tea factory directors in Kiambu county led by David Chuchu (centre seated) in a press conference at Kambaa tea factory on Thursday, April 8, 2021. They opposed the election of directors as per an executive order.
Image: STANLEY NJENGA

A court has suspended 14 sections of the Tea Act, 2020.
Counties
2 months ago

Those opposed to the reforms told off
Business
6 months ago

The exercise is meant to assert reforms in the tea sector.
Counties
3 weeks ago
by STANLEY NJENGA Correspondent, Kiambu
Central
09 April 2021 - 11:28