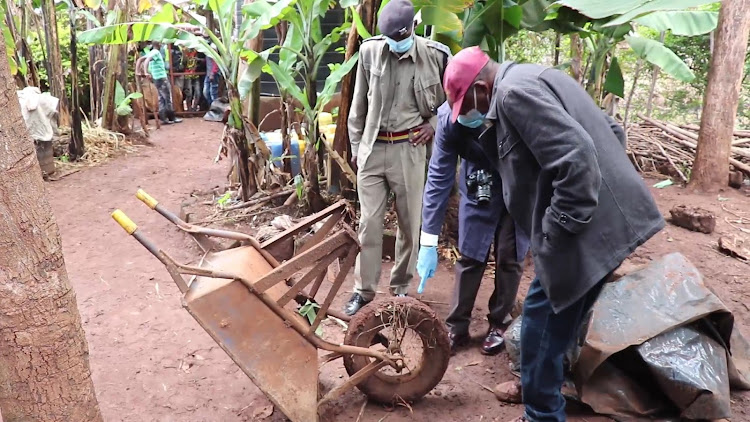 Police officers at the scene where the body of Anthony Macharia was found buried in a shallow grave.
Image: Alice Waithera 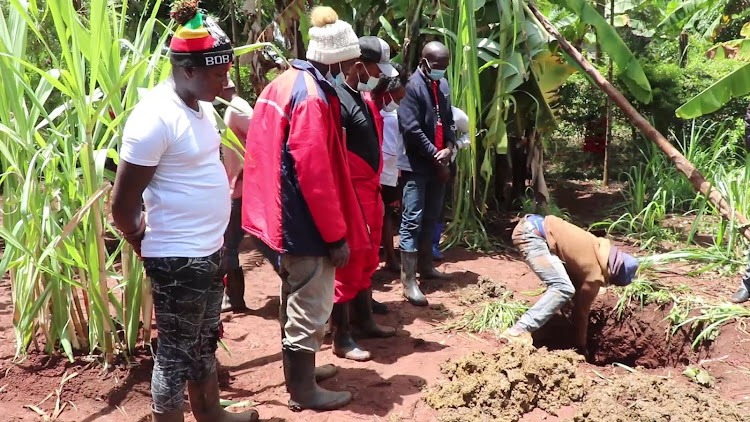 A resident digs out cow dung that had been used to bury the body of 55-year-old Anthony Macharia in his farm in Kabati, Murang'a.
Image: Alice Waithera 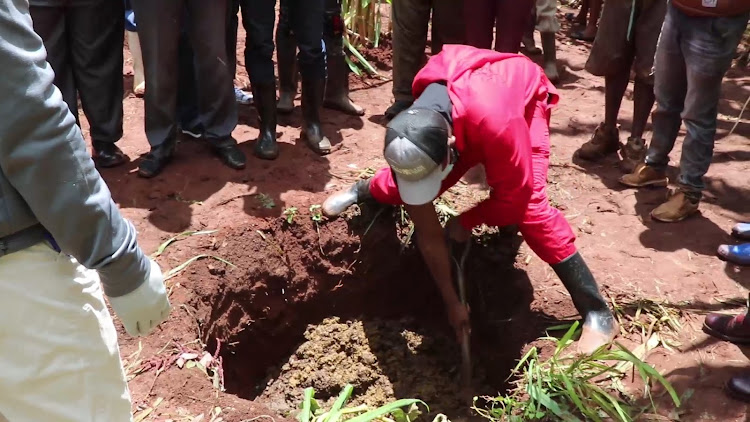 A resident digs out cow dung that had been used to bury the body of 55-year-old Anthony Macharia in his farm in Kabati, Murang'a.
Image: Alice Waithera

Police in Murang'a have launched a manhunt for a Ugandan after his employer was found murdered and body buried a few metres from his house in Kabati.

The  farmhand, who has since fled, is suspected of killing Anthony Macharia, 55, whose  body was found buried in a shallow grave that was covered with cow dung on Wednesday morning.

Widow Grace Wanjiru said the husband decided to spend Tuesday night in his shamba boy’s house which was next to his cow pen as one of his cattle was to deliver that night.

The two, she said, had spent the day together digging holes in their farm for planting banana tubers.

But when morning came and there was no sight of him, Wanjiru went to the shamba boy’s house, only to find it empty. She, however, found his mobile phone.

She then left to a shop where Macharia used to deliver milk early in the morning and was told that he had not been seen.

It is then that the family started searching for him with the help of neighbours and got curious that one of the holes the two had dug the day before had been filled with cow-dung. She said they saw his belt protruding from the hole.

Macharia’s niece Grace Wangui said her aunty had called her on Wednesday and told her about the disappearance.

“We looked for him all over the farm only to find his body buried in the shallow grave,” she said, adding that the family suspects the farmhand was behind his death.

Neighbours expressed shock at the turn of events, saying Macharia was friendly and called for the police to ensure justice is served. They said the Ugandan seldom interacted with residents.

Kandara deputy county commissioner Carolyne Nzwili said a search had been initiated with preliminary investigations revealing that the shamba boy had used a Kenyan identity card to register his mobile phone number.

She said a postmortem would be conducted to determine the exact cause of Macharia's death as investigations continue.

The commissioner said the incident is not isolated as another farmhand of Ugandan origin assaulted and fatally injured his employer in the same subcounty.

“We are asking people to avoid employing helps from other countries, especially when they cannot get complete information about them,” she said, terming it vital for farmers to know the origin of their workers and have copies of their identity cards.