Hundreds of locals being turned away from health facilities.

• The County initially received 3,000 doses meant for health workers but received two other subsequent batches which have been used up.

• All the doses ran out by March 31 and the county has appealed to the government to consider disbursing more vaccines to the county. 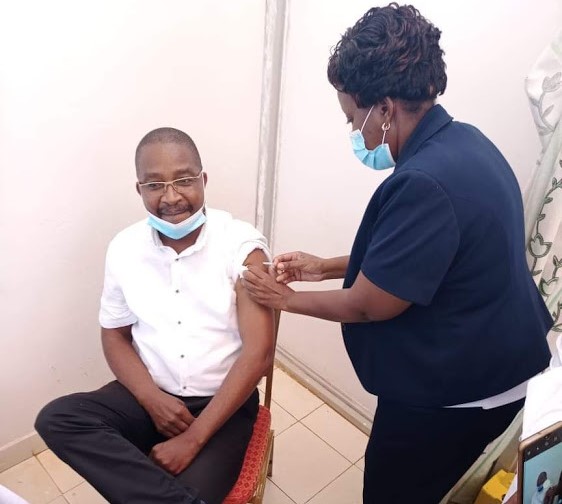 Over 9,500 doses of the Covid-19 vaccine disbursed to Murang’a County have been depleted.

Hundreds of locals continue to flock to the designated health facilities where the vaccine is being administered but end up being turned away.

The situation was further aggravated by the government’s directive to have those aged above the age of 58 be factored in.

The County executive member for health and sanitation Joseph Mbai said this is despite the fact that the county reported extremely low numbers of vaccination when the exercise was rolled out mid last month.

The County at first received 3, 000 doses that were targeted at health workers before receiving another batch of 3, 000 doses late last month.

About 3,500 more doses were disbursed early this week.

But all the doses ran out by March 31, Mbai said, and appealed to the government to consider disbursing more vaccines to the county.

Mbai who addressed journalists on Thursday also dismissed claims that some medics have been charging locals for the vaccine.

The exercise, he said, is closely supervised by his department and gave an assurance that the jab is being administered for free.

Mbai also appealed to locals to strictly follow the government’s protocols on the prevention of the virus to safeguard their lives.

“Some people still continue to walk around without masks in shopping centres. We are partnering with the security officers to ensure those found in breach of the government’s guidelines are arrested,” he said.

Kiharu assistant county commissioner Priscilla Kiluta on Thursday led a team of security officers in arresting those found without masks in public places.

Kiluta also closed down four bars and revoked their licenses for operating before the required hours.

She urged residents to help the government control the spread of the virus by wearing masks and sanitizing while avoiding crowded places, noting that they will continue arresting those who fail to.

The county reported four cases of confirmed Covid-19 cases on Thursday while 24 others are awaiting their results.

The ICU at Murang’a Level 5 hospital had a bed occupancy of 14 with one confirmed Covid-19 patient while 13 are suspected patients.

The isolation centre at the hospital had eight people while six others were receiving emergency treatment in the casualty department.