My letter to Uhuru in good faith - Kang'ata

• The senator said prior to writing the letter that was leaked to the media, he had met leaders from Murang'a who said they wanted farmers' interests catered for first before they supported the BBI.

• Kang'ata said as the chief whip, it was his responsibility to inform the President that all was not well. 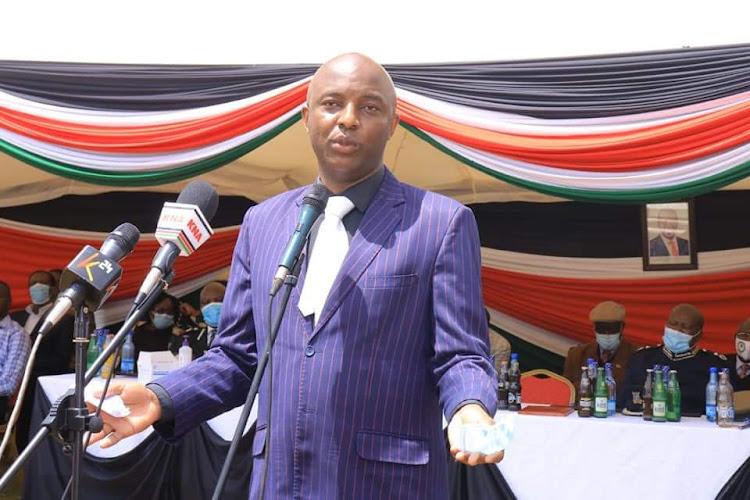 Senate Majority Whip Irungu Kang'ata has said his warning to President Uhuru Kenyatta that the Building Bridges Initiative process was unpopular in Mt Kenya was given in good faith.

The senator said prior to writing the letter that was leaked to the media, he had met leaders from Murang'a who said they wanted farmers' interests catered for first before they supported the BBI.

Kang'ata said as the chief whip, it was his responsibility to inform the President that all was not well.

But many people took the letter negatively and accused him of disrespecting the President, Kang'ata said during a service at Gitugi AIPCA Church.

"There is nowhere in that letter that I insulted the President. I just relayed what I had been told by the people of Murang'a. I respect and love the President but I also think it is important to tell him the truth," the senator said.

Kang'ata said should he lose his position due to his outspokenness, he will be grateful for the time he has been able to serve.

The Murang'a senator said the Mt Kenya region supports the President and apologised for any damage that the letter may have caused.

"The President made me the prefect of the Senate. If I see leaders misbehaving, is it wrong for me to report them? Should I be punished for reporting them?" Kang'ata asked.

In the letter that elicited strong reactions from both the Kieleweke and Tangatanga factions of Jubilee, Kang'ata had accused the National Assembly Majority Leader Amos Kimunya of exclusion and discrimination in executing duties.

Many leaders affiliated to the Deputy President William Ruto supported Kang'ata's letter, saying they have been raising the same issues but that their concerns have been falling on deaf ears.

But a section of pro-Uhuru MPs said Kang'ata had been compromised by the Tangatanga faction, raising questions on why he chose to publicly address the President.

Last week, President Uhuru Kenyatta told off Kang'ata, saying he did not need to be lectured through letters and emphasised that he was firmly in control of the nation.

But Kang'ata firmly stood by his letter saying divisions among the country's top leaders will further harden the BBI process.

"If leaders are divided, it will be a challenge to sell BBI," the senator said.

Mathioya MP Peter Kimari who also attended the service asked Kenyans not to take the BBI lightly, saying it has the potential to change the course of the country.

Kimari said should it not go through, Murang'a county stands to lose over Sh100 million promised through the extra constituency proposed in the BBI.

"This will mean a lot of many lost opportunities in employment and resources," Kimari said. Murang'a people should support it wholly to save Kangema and Mathioya constituencies that are currently protected by the Constitution, he added.

Kimari further noted that the government printer has agreed to release 1 million copies of BBI documents for distribution to locals. The copies will, however, contain issues concerning the region.

He urged locals to continue supporting the President, saying his government has effected major development in the county through multi-billion roads and water projects.

He called upon leaders to keep off politics until next year as God will anoint the best President when the time comes.

Did Kang'ata colour outside the lines or was it an Overton Window reality?

Who between the Mt Kenya governors and Kang'ata is telling the truth about BBI?
Siasa
1 year ago
by ALICE WAITHERA Correspondent, Murang'a
Central
18 January 2021 - 07:22