Two arrested with 10 pieces of ivory in Nanyuki town

Official says the arrest was a coordinated work of shared intelligence between KWS and DCI officers from Isiolo, Meru and Laikipia counties. 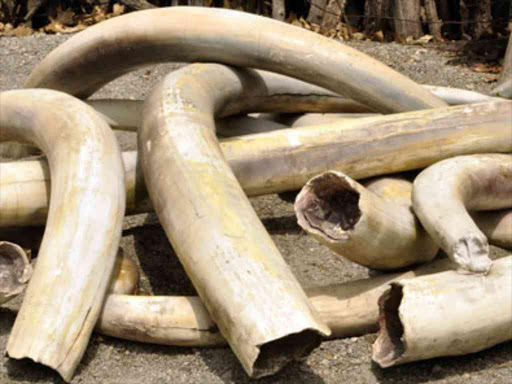 Two suspects were on Thursday arrested in Nanyuki town while transporting 10 pieces of ivory in a vehicle.

Kenya Wildlife Services senior warden in charge of Laikipia county Jacob Orahle said that the suspects were arrested by DCI officers while on transit.

They were detained at Nanyuki police station awaiting arraignment in court. The  ivory weighing 31.6kgs was taken to KWS stores as part of the evidence that will be used in court against the two.

“We managed to arrest the suspects namely Alphonse Otieno and Kangai Alpham who were transporting the ivory in a Toyota Noah vehicle,” Orahle said while addressing the press at his Nanyuki office on Friday.

He said the ivory was not fresh thus ruling out a possible recent poaching of elephants adding that it was possible the trophies could have originated from a neighbouring county.

Orahle said cases of poaching have been on the decline in Laikipia, attributing it to increased surveillance in wildlife sanctuaries.

He the arrest of the two suspects was coordinated following shared intelligence from KWS and DCI officers from Isiolo, Meru and Laikipia counties.