It will be the first tarmac road in the sub-county since independence.

•The road will be a Class B road, 6.5 meters wide with provision for pedestrian walkways and a lane for cyclists, able to withstand heavy trucks that ferry stones from quarries in  the area.

•MP Wainaina called on the contractor to ensure that 30 per cent of works at the project are given to locals. 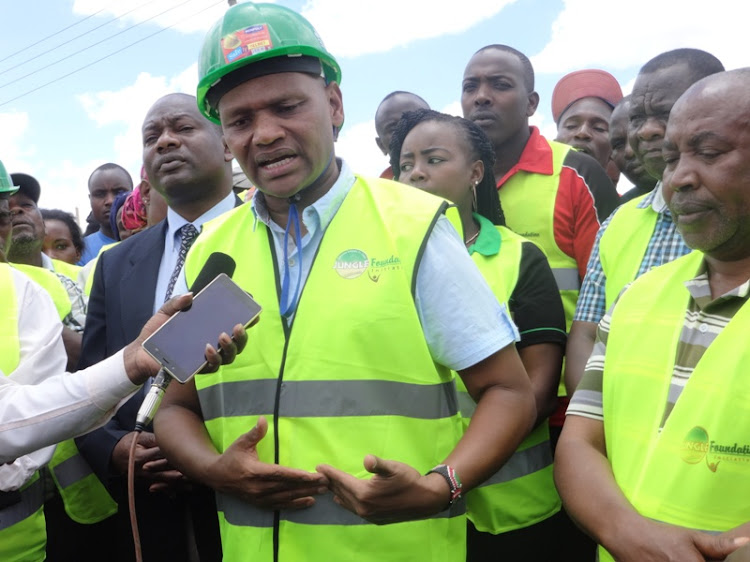 Plans are underway to tarmack a 24 kilometer road in Thika East next month at the cost of Sh1 billion.

The Gatuanyaga ring road will stretch from Muguga-Ngurai-Munyu-Githima-Kang’oki-Kisii and back to the Thika-Garissa highway. The government will spend Sh1 billion on the road and it will be the first tarmac road in the sub-county since independence.

InterWays Works Limited has been contracted by the government through the Kenya Urban Roads Authority (KURA) to do the job, expected to be complete in 30 months.

The road will be a Class B road, 6.5 meters wide with provision for pedestrian walkways and a lane for cyclists, able to withstand heavy trucks that ferry stones from quarries in  the area.

Area MP Patrick Wainana, who spoke during a public participation forum organised by KURA in Munyu on Friday, said that completion will bring an end to the suffering area residents have endured for decades due to the deplorable state of the road.

He said that he will engage KURA and the contractor to have the contract adjusted to have the road be completed in two years time. He added that once complete, street lights will be erected to boost security.

“The roads in Thika East especially in Gatuanyaga ward have for decades been in poor conditions especially during rainy seasons. The situation is usually worsened by hundreds of lorries and trucks that ferry stones from quarries in the area. But this will soon be a thing of the past once the road is tarmacked. We are glad that after intensive lobbying the government has heard our prayers,” Wainaina said.

The MP said the road will open up the region for investment, boost trade and spur the region’s economy. “Expect land prices in Thika East villages to triple once the road is complete because accessibility to Thika town will be eased,” he said.

At the same time, Wainaina pleaded with locals who have encroached and developed structures along the road corridor to pull them down once the construction works begin.

“We don’t want delays in this project. We want it completed on the scheduled time for our own benefit and therefore anyone who has erected structures on the road corridor should move with speed and pull them down, else they will be brought down at their own cost. The road design is complete and cannot be contested,” the MP said.

Wainaina called on the contractor to ensure that 30 per cent of works at the project are given to locals.

He noted that the same contractor, Interways Waorks Ltd, will also re-carpet some 13 kilometers of roads within Thika CBD at a cost of Sh700 million.

Gatuanyaga residents, who spoke during the forum, called on the contractor to ensure the road drainage is constructed properly so as to address the flooding menace witnessed in the area during rainy seasons.

They also welcomed the project saying that it’s godsend and will end their suffering and boost the region’s economy significantly.

“We have suffered for a long time, carried our sick on our backs because roads here have been impassable. But there’s light at the end of the tunnel and we hope our suffering will come to an end,” said resident Jacinta Mueni.

Matatu operators and boda boda riders also hailed the project saying that it will ease their job and make it profitable.

They decried that they have been incurring huge losses repairing their vehicles and motorbikes damaged due to the deplorable state of the road.