Unionist says the country has no capacity to conduct increased testing due to shortage of staff and resources.

•Goody challenged the government to do a mortality audit and it will realise the country is still losing many patients to the disease.

•She said infections should be going up especially after the government lifted movement restrictions. 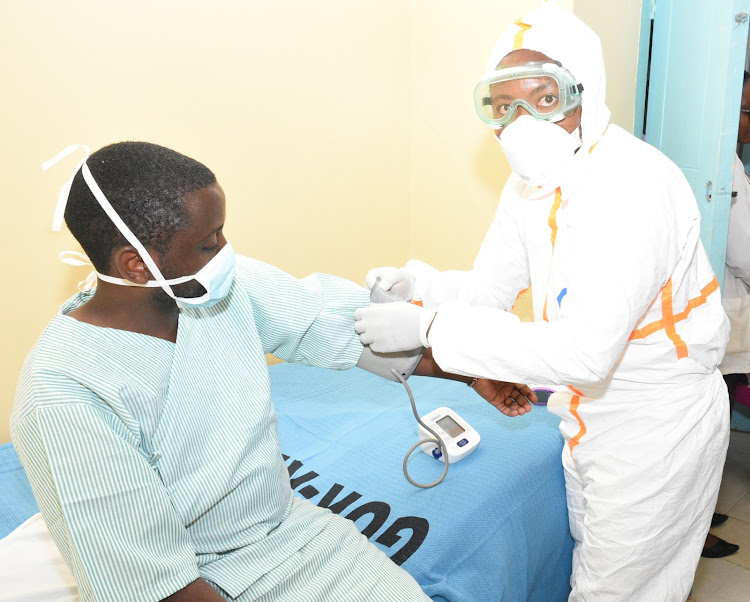 NO CAPACITY: A healthcare worker performs a dry run to test the county’s preparedness in tackling Covid-19 at Mt Kenya Hospital in Nyeri in March, 2020
Image: EUTYCAS MUCHIRI

The government’s claim that the Covid-19 curve is flattening is untrue, the doctors' union has said.

Central Kenya secretary general of Kenya Medical Practitioners, Pharmacists and Dentists Union Gor Goody challenged the government to do a mortality audit and it  will realise the country is still losing many patients to the disease.

The government in its daily Covid-19 briefings has been indicating a decrease in the rate of infections.

Goody who spoke on Gukena FM said people suffering from non-communicable diseases such as hypertension, diabetes, cancer and the aged are getting Covid-19 and dying without being tested.

“Mortuaries are abnormally full, which means that the mortality rate has increased. But we are not getting the right statistics. We are only claiming that the curve is flattening. How is it flattening?” she posed.

She said the country has no capacity to conduct increased testing due to shortage of staff and resources.

That is why the number of infections given out daily by the government is reducing. Goody said those tested take one to four weeks to get their results.

She said the number of infections should be going up especially after the government lifted movement restrictions leading to high urban-rural migration.

Goody added that doctors are demotivated as their salaries are always delayed and they are supplied with insufficient protective gear to fight Covid-19.

She said, currently, healthcare workers are using protective equipment donated by the private sector, adding that not all of the protective gears are of the right quality.

“But we are expected to attend the sick with the substandard masks and personal protective equipments (PPE),” she said on Thursday.

Both national and most county governments have been claiming that they have enough protective equipment.

Goody said there is also a shortage of healthcare workers, fording expectant and elderly workers to work in Covid-19 centres.

“We know very well that expectant women and the elderly health workers are not supposed to work in hospitals,” she said.

Healthcare workers, she added, also lack medical insurance making it difficult for them to afford the very health care services they provide.

National Hospital Insurance Fund does not cover Covid-19 patients after the WHO declared the diseases a pandemic.

She also cited corruption in the Ministry of Health, such as the case of Kemsa, as another challenge that has been affecting supply of PPE and other equipment.

Post a comment
WATCH: The latest videos from the Star
by EUTYCAS MUCHIRI Correspondent, Nyeri
Central
06 September 2020 - 22:00
Read The E-Paper