The company's land lease expires this year and renewal has been blocked by several parties. 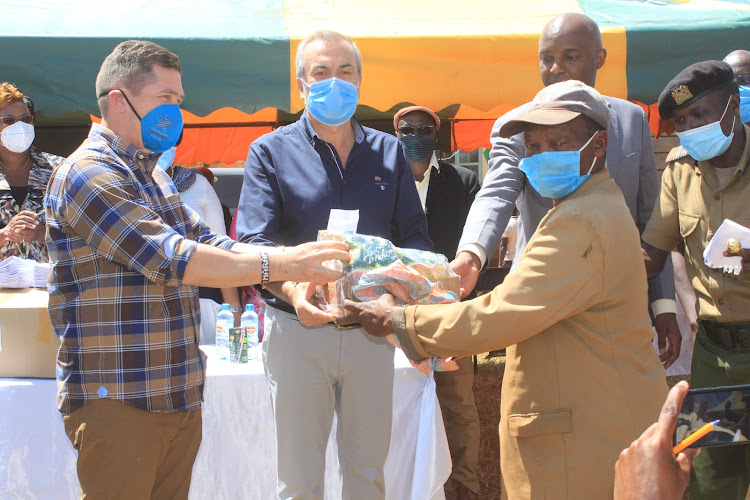 US ambassador to Kenya Kyle McCarter has come to the defence of Del Monte on the renewal of its land lease.

McCarter has said the American multinational that occupies over 22,000 acres of land in Murang’a and Kiambu has positively impacted the lives of the people living around it.

The ambassador cited the many workers employed by the fruit processor and numerous schools it has constructed and renovated.

He spoke at Kihiu Mwiri area in Gatanga during a food issuance exercise organized by Murang'a Senator Irungu Kang’ata in partnership with the US embassy.

The company's land lease expires this year and renewal has been blocked by several parties that have been calling for part of the land to be ceded to the community.

“When I was first told about the matter, I asked what the company has done for the community and I was given details of the numerous projects undertaken. I told them, it is good what you have done but you also need to talk about it,” McCarter said.

He then talked to workers who have been in the company for years and they gave him their experiences and how they were able to educate their children and change their lives, he said.

The envoy said he had been pushing the company to invest more in the community and it will continue to work with locals.

McCarter said the lease renewal issue should be discussed by stakeholders and an amicable solution found.

He called upon the stakeholders not to politicize the matter which he said required honest dialogue.

Companies such as Del Monte Kenya empower Kenyans  to have better lives while strengthening the economy, he added.

McCarter noted that the US considers Kenya an ally and that it has used Sh5 billion to help Kenyans fight the Covid-19 pandemic and its effects.

He however said the embassy uses local organisations to uplift the lives of Kenyans and reach the lowest in the community.

“So many people raise concerns that the money will be stolen but the way our friendship works, we do not just write cheques. About 95 per cent of what we do is through local groups,” he said.

The US will continue to invest more to help the country fight the pandemic and resume normal life, he said, and praised Kenyans as generous and social people.

Kenya, he said, deserves partners such as Del Monte who help the country to prosper and stop relying on foreign aid.

He said the US is committed to work with Kenya in a way that will not push it into excess debts that may be difficult to pay but walk together towards self-reliance.

Senator Kang’ata urged Del Monte Kenya to consider buying local produce such as macadamia and export it together with its juices.

“To maximize the benefits, we will need value addition. Such an arrangement would be a win-win for the company, locals and the country,” Kang’ata said.

Kang’ata also encouraged dialogue on the land lease renewal between Murang’a county government, Kandara Residents Association that has been blocking the process and the company.

“Del Monte has said it has no issue ceding part of the land. I propose the construction of a university and hospital complex in the land to serve locals,” he said.

Area MP Nduati Ngugi lauded the company for supporting education and appealed for more help in expansion of learning facilities.

Residents seeking amicable solution to end the  impasse over the company’s land.
Counties
1 year ago