Rudderless Mt Kenya will be spat on — Kiunjuri

Urges governors to return some devolved functions back to national government.

• Kiunjuri said Mt Kenya has shown the country political directions but it's unclear who will assume the mantle of leadership after President Kenyatta's term ends.

• The Agriculture CS urged to travel widely and ask Kenyants to support him for Deputy President in 2022. 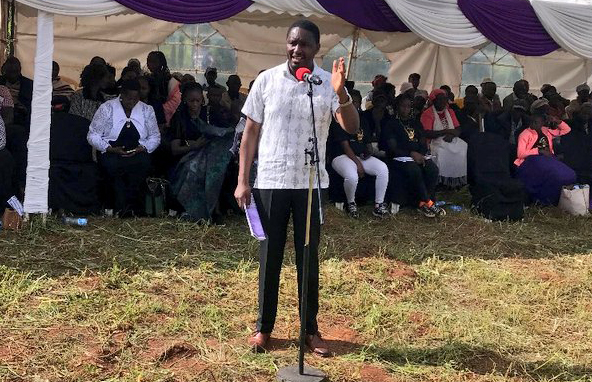 “As a people with great interest in our community, we must sit and open our eyes wide. It will reach a time when we will get spat upon," he said in Kikuyu on Monday during the burial of his friend Batista Maina in Meru county.

Without having their own voice, the region's people will become blind followers, he said.

"A farmer without his tractor ploughs before rains start ... We can't just stay rudderless expecting God to return. We must get saved while on Earth and eat the holy Sacrament before Christ’s return," he said in Ntugi village in Buuri subcounty.

We're saying let it rain, they'll roof our house for us. As Mt Kenya, we are contented saying let them take control. We are exposed, giving an opportunity to intruders — any bird can build its nest.

Kiunjuri said lack of preparations for the presidency in the 2022 General Election is a tall order for the region.

"You cannot remove your house's roof during rains but during the dry season. We are saying let it rain, they will come and roof our house for us. As Mt Kenya region, we are contented saying let them take control. We are exposed, giving an opportunity to intruders —any bird can build its nest,” Kiunjuri said in Kikuyu parables.

Kiunjuri said believers read the Old Testament to get more knowledge about the New Testament, adding that one cannot preach Revelation alone and expect the congregation to get saved.

“One cannot join University without attending Primary and Secondary education. Get me clearly,” the CS said.

He said the Building Bridges Initiative must enhance peace and address the problem of do-nothing ceremonial posts created by the Constitution.

“We want a strengthened governance structure where all leaders including deputy governors, the Deputy President and ministers have specific job descriptions, not ceremonial posts where they sit in offices to read newspapers," Kiunjuri said.

He said there will be another improved version of BBI and once it is out, all citizens should scrutinise it and give their input.

“I foresee a storm. This referendum should not bring division but the BBI should cater for every Kenyan's interest ... Everybody has assented to BBI recommendations but why are some leaders pushing others to the wall claiming some of us are against BBI?. We have all agreed on BBI and a possible referendum, why are some egocentric leaders seeking wrangles, chaos and war every now and then?”

Disease control is in total collapse, the health sector is so disorderly because of devolution. Governors must also state which devolved functions on fisheries, livestock and agriculture are too troublesome.

Kiunjuri urged governors to be prepared to transfer back some devolved functions that counties have failed to improve.

He called for a governors' conference to discuss healng the health sector.  He said they must decide which departments, salary issues, facilities and other issues are too hard for counties to handle "so they are reverted to the national government".

"Disease control is in total collapse, the health sector is so disorderly because of devolution. Governors must also state which devolved functions on fisheries, livestock and agriculture are too troublesome, derailing the success of devolution," Kiunjuri said.