Extremely young riders are mostly the ones involved in cases of defilement due to their immature reasoning, says Murang'a county police commander Josphat Kinyua 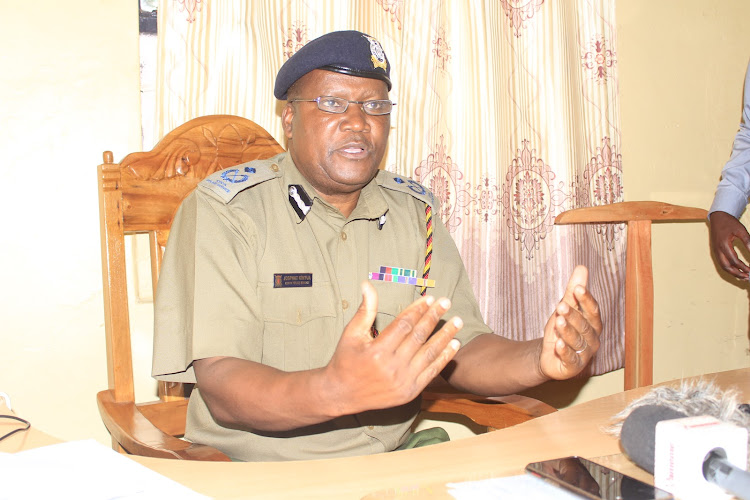 Nearly all theft cases reported in Murang'a are executed with the help of a boda boda rider, county police commander Josphat Kinyua has said.

Speaking to about 500 riders at Ihura Stadium on Saturday, Kinyua warned the operators against abetting crime by ferrying criminals.

He said criminals often hire boda bodas to take them to and from their operations because the motorcycles can easily get to areas that are inaccessible by vehicles.

Kinyua said in almost all theft cases reported to police, the criminals used a boda boda to escape. In murder cases, bodies are dumped using motorcycles which the criminals later use to flee from the scene of crime, he said.

Two weeks ago, boda boda tyre marks were found at the scene where the body of a man had been dumped in Kambirwa area of Kiharu.

The victim’s eyes were gouged out. The body was dumped along the Mukuyu-Kambirwa.

Kinyua asked boda boda riders to work with the police to ensure the criminals are arrested. He said most of the challenges faced by the riders can be easily be sorted out if they formed saccos.

He cautioned the riders against registering school dropouts in their saccos, saying only mature riders who are less susceptible to crime should be included.

“Extremely young riders are mostly the ones involved in cases of defilement due to their immature reasoning,” Kinyua said.

He said the government had committed enough resources to facilitate 100 per cent transition of students from primary to secondary schools and children should not be encouraged to forfeit their studies for quick cash.

The riders had gathered at Ihura Stadium for a community policing meeting during which they were given sports shoes donated by the Ahadi Kenya Trust.

“In case of emergencies, the rider is not able to control the motorcycle if he is wearing slippers,” Kamau said.

He asked the riders to volunteer information to the police when they spot suspicious people in their line of work.

“If you ferry someone who looks questionable especially at night, please alert your colleagues and ask some to follow you so that that person can explain where he is going,” he said.

He pledged to support the riders in the projects they initiate through their saccos.

Nominated MCA Stephen Chege promised the county government will help the riders to form saccos and invest in income-generating activities.

His hands and legs were tied and his head mutilated, with flesh missing on his face.
News
3 years ago

A man in Kianderi village in Murang'a has hacked to death his two grandfathers.Kanyuko Wairimu, 26, first attacked Stephen Kanyuko and then ...
News
4 years ago
Post a comment
WATCH: The latest videos from the Star
by ALICE WAITHERA Correspondent, Murang'a
Central
18 November 2019 - 22:00
Read The E-Paper