• The learners claimed that knife-wielding criminals waylay them from as early as 6pm and rob them of cash, phones and laptops.

• A first-year student was in February stabbed to death on her way home for refusing to surrender her phone to criminals. 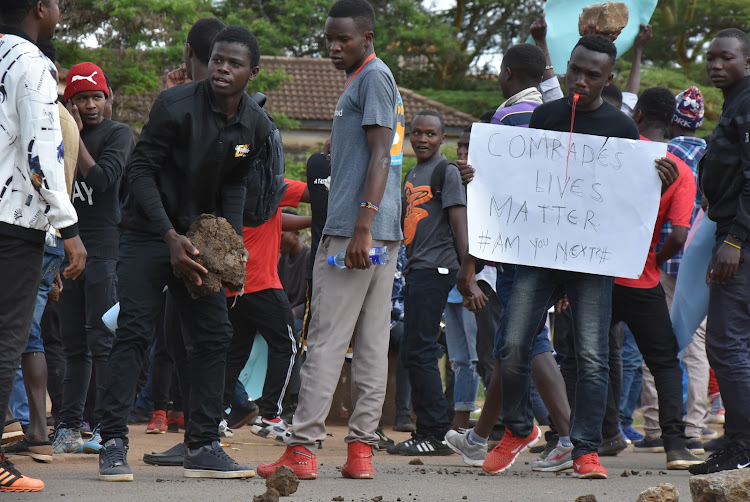 COMRADESHIP: JKUAT students protest against insecurity on Thika Superhighway on Monday before the university was closed indefinitely.
Image: John Kamau 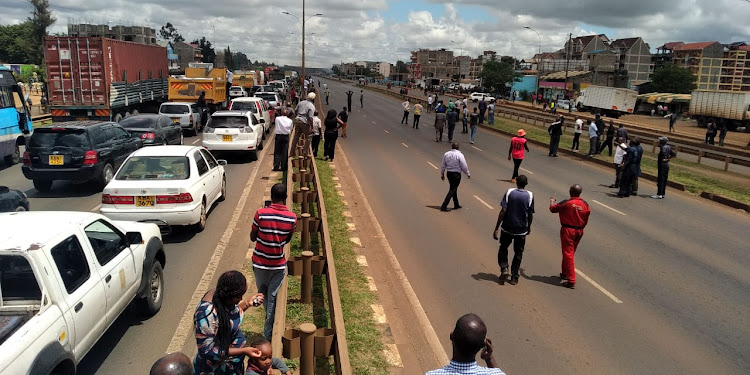 The Jomo Kenyatta University of Agriculture and Technology was on Monday closed indefinitely after students blocked Thika superhighway protesting insecurity near the institution.

The students had engaged Juja police in running battles for two hours during which motorists could not pass through the town.

The learners accused the law enforcers of not protecting them from criminals. They claimed that knife-wielding criminals waylay them from as early as 6pm and rob them of cash, phones and laptops.

The university was closed via a memo from the acting Deputy Vice-Chancellor in charge of academic affairs.

The memo read in part: “In a special Senate meeting held today, Monday, November 11, 2019, it was resolved that the university closes until further notice.”

A statement to the media said the closure was occasioned by the students’ agitation over insecurity outside the main campus at Juja.

“The university management has engaged government security and law enforcement agencies to address the matter. In addition, the university security department is working closely with the Juja administration to ensure the security of JKUAT students and staff,” the statement said.

“We wish to state that we have exhausted all avenues of dialogue and boardroom meetings yet we still have insecurity cases,” the association said.

JKUSA had on Sunday advised students meet for peaceful demonstrations yesterday to protest against the insecurity and failure by authorities to protect them and their valuables.

They accused some boda boda operators of colluding with the criminals.

“If you fall in the hands of these ruthless criminals you will get mugged and even stabbed. Right now some of our comrades are recuperating with stab wounds. We won’t allow this to happen anymore,” a student who declined to be named said.

In February, the students took to the streets in protest against the murder of Tabitha Muthoni, a first-year student.

Muthoni and a friend were going home when assailants stopped them near Seagull Hotel and demanded their phones.

The victim resisted and was stabbed. She died on the way to the University hospital.

Post a comment
WATCH: The latest videos from the Star
by JOHN KAMAU Correspondent
Central
11 November 2019 - 22:00
Read The E-Paper