What suspension of Thiba Dam construction means for Kirinyaga

• Central Regional Commissioner Wilfred Nyangangwa, assured that   the problem will be solved soon. 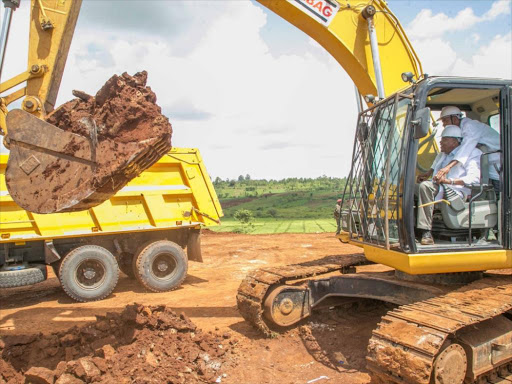 A temporary halt to the construction of the  Sh20 billion Thiba Dam meant to boost rice production in Kirinyaga County spells doom for rice farmers who viewed the project as a major solution to water shortage in Mwea.

The close down, attributed to cash flow from the treasury, has seen over three hundred workers previously engaged by the contractor, Strabag Internationals suspended.

The workers including drivers said they were sent packing because the government had not released money to the company.

Officials from the National Government and those in charge of the Strabag Company have confirmed that the government has not remitted money in excess of Sh1 billion which has left them with no other alternative but to suspend the work.

Central Regional Commissioner Wilfred Nyangangwa, assured that   the problem will be solved soon.

“It is true the construction has temporarily been suspended due to problem of resources,” the Commissioner said without elaborating.

He said, as the Chair of the Regional National Government Project Implementation Team, he has impressed upon officials at the treasury to address the issue.

“Once the problem is addressed, the project will resume in the shortest time possible, we are taking the matter seriously,” he said.

Nyangangwa said the government is committed to ensuring the project moves within the scheduled time to enhance irrigation of rice in Mwea and improve   country’s food security.

“The problem is further complicated by some of the people who surrendered their land for the construction of the dam, claiming they will come back and re-possess their land if the work is abandoned,” claimed the people living around the project.

“We have been told to go home until further notice because the Company has no money to pay us and finance the project,” John Njiraine, a worker at the dam said.

A Strabag official who is, however, not authorised to speak for the Company said the change of the Cabinet Minister and his Principal Secretary was also affecting the cash flow for the project.

He said they have now gone for over eight months without receiving any funding from the government which has virtually brought everything to a standstill.

“We are getting worried that the works at Thiba Dam which has been on good progress at 30% is now almost abandoned, we don’t exactly know what is happening, we are only hoping the dam will not end up as Kimwarer Dam,” said the official

“There is even a possibility that cartels importing cheap rice to the country could be behind the whole thing, trying to frustrate the work with an intention of making sure the dam is not completed to enable them continue importing the rice,” he said.

The Sh19 billion project was expected to be completed in 45 months, but the Manager, Eng. Stephen Mutinda, always claimed the work could be completed much earlier that is before the problem occurred.

Mutinda previously claimed with all factors remaining and according to the work plan, the construction could have taken about 36 months to complete. But this will now have to change.

Data from the Kenya Bureau of Statistics shows that Kenya imports rice worth about Sh 40 billion every year largely from Pakistan, Thailand, India and Vietnam.

It is estimated that with the completion of Thiba Dam, this amount will be reduced by half or even more if it succeeds in improving more water, to allow for three seasons of rice per year, unlike the current one season.

While the current rice production during a good season is about 100,000 tones or about 80 percent of Kenyan total rice, it has been achieved without steadfast water flow.

The rice scheme is fed by direct water flow from Thiba and Nyamindi rivers without a dam.

But Thiba Dam will provide a holding ground for water, ensuring controlled flow even during the times of lower rainfall.

This is planned to increase normal production by about 100 percent, meaning 140,000 tones and since the water will double overall area under rice, Mwea is set to produce about 280,000 tons of rice.

There is much more opportunity as by the time the dam is finished, ongoing research on better yielding rice is likely to have reached the farm level.

Rice farms are also likely to be more mechanized by then. The storage of rice will have improved, eliminating post-harvest losses.

More farmers will also be educated on modern farming methods to ensure that they harvest more bags of rice per acre than they currently do.

Exporters of rice into Kenya produce the same tonnage as Kenya, according to data aggregator index. It therefore means, Kenya has a big opportunity to become self-sufficient in rice if it can increase its yields per acre.

The project will also help in the stabilization of the irrigation water supply, allowing double cropping with the area under irrigation increasing from 25,000 cares to 35,000 acres.

The construction of the Thiba Dam is being financed in partnership with Japanese Government through Japan International Cooperation Agency (JICA).

At completion, the Dam will be 40 meters tall and 1 kilometer long and is expected to have a holding capacity of 15 million cubic meters.

The construction was initially expected to take Three years and seven months, meaning it would have been complete around July 2020.

Thiba Dam project, officially launched on November 23 2017 by Presidents Uhuru Kenyatta, is being constructed at Rukenya in Gichugu Constituency, about four kilometers from Kutus town, the County Headquarters.

Munene blames MPs from Embu county for being unable to lobby for funds from President Uhuru Kenyatta.
Counties
2 years ago
by KNA
Central
02 November 2019 - 13:49