They are to be trained on financial literacy, saving and adding value to the money they receive.

• Gichigi said the pilot phase of the Kenya Social and Economic Inclusion programme is being rolled out in five counties. 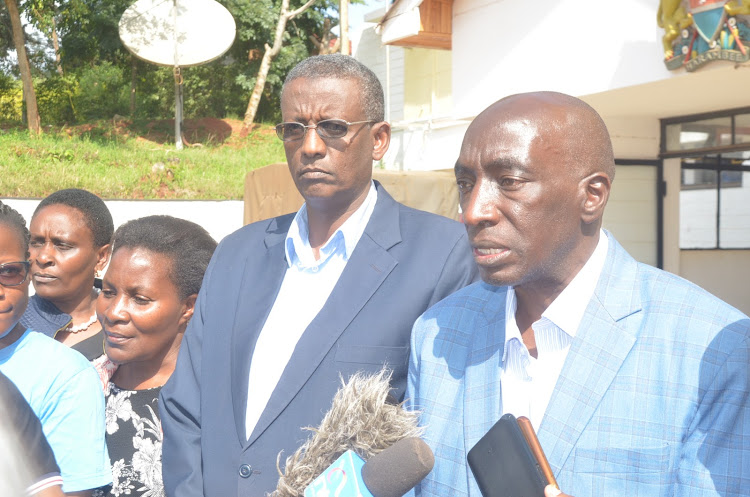 The government has commenced a Sh32 billion initiative meant to complement the cash transfer programme.

Gichigi said the pilot phase of the Kenya Social and Economic Inclusion programme is being rolled out in five counties.

The counties include Murang’a, Taita Taveta, West Pokot, Kitui and Marsabit, with each getting 1,500 beneficiaries.

Gachigi noted that through the programme, beneficiaries will be trained on financial literacy, saving and adding value to the money they receive from the government.

He spoke in Murang'a when he met county commissioner Mohamed Barre at his office on Tuesday.

After the training, he said, they will then receive grants that will further boost their business.

“This programme will be within the component of social protection which has several players working towards making the lives of disadvantaged Kenyans better,” he said.

The programme is also partnering with the Ministry of Agriculture and Livestock to equip the beneficiaries, most of whom are livestock farmers, with the skills they require for the practice.

“We are also working with the Ministry of Health to ensure they get NHIF covers so that the funds they get will not be channelled towards medical care,” he added.

Gachigi said that the World Bank has given the government Sh25 billion for the programme while the rest has been financed through a grant from the for Department For International Development.

The financing agreement was signed by the partners in March this year for the programme that will run for four years.

In Murang’a, the programme will target Kiharu and Maragua subcounties which are worst hit by poverty, Gachigi noted.

In each subcounty, 750 people will benefit from Gaturi, Kambirwa and Kambiti areas, which also have the highest numbers of cash transfer beneficiaries in the county.

Gachigi noted that the government is supporting over 8 million people in the country through the cash transfer programme.

“We have 1,233,000 households listed under the programme with an average of six beneficiaries each,” he said.

The number of older persons benefitting is 833,000, orphans and vulnerable children are 350,000 while persons living with severe disabilities are 47,000.

Barre on his part said though the county is regarded as a tea zone, the number of people living below the poverty line is extremely high.

“There are so many people should be in the programme but were cut off because it had a limit. We are currently supporting 990 disabled persons, 42,000 elders and 7,441 disabled persons,” Barre said.