• Researchers want the government to commercialise GM cotton so farmers can access the seeds by April next year. 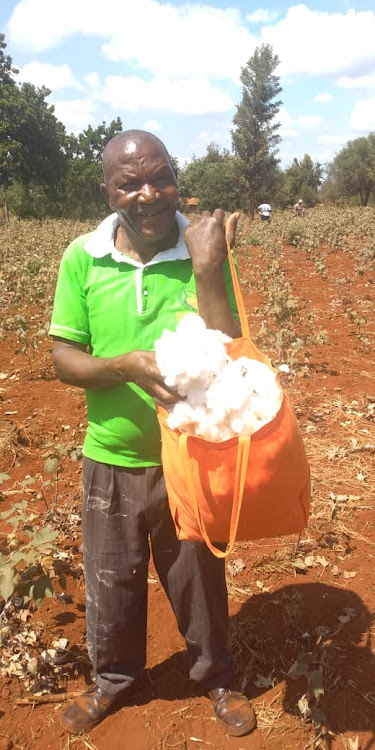 Mwea cotton farmers in Kirinyaga have expressed concern over the high cost of pesticides.

They say they have to dig deeper into their pockets to be able to control the African bollworm and the mealybug. The high prices increase the cost of production and minimise returns, they say.

Many residents have relied on the crop for years. Back in the day, the crop did so well and farmers reaped big. This is not the case any longer. Their livelihoods are now at risk.

Purity Wanjiku from Kajiji village said despite spraying 10 to 12 times, the pests disappear for a while and the damage is more severe when they get back.

“I think the pests are becoming resistant to pesticides. Even when you spray, the crops are still affected by the pests,” she said on Monday.

Wanjiku has been growing cotton for the past 10 years. In the past, she would harvest at least 50 kilogrammes from her parcel. In recent years, things have changed for the worst and she hardly gets 10kg.

“Even the little I get I spend nearly half of it on buying pesticides rather than save. Growing cotton has become such a burden that even young people do not want to venture into it. It has been left to old people who have little to show,” Njeru said.

Researchers concur that cotton growing is turning out to be a nightmare. On Thursday last week, Dr Charles Waturu, a lead scientist of GM cotton in Kenya, said the burden of controlling the bollworm cotton has become worsened by the reemergence of the mealybug pest.

He blamed the reemergence of mealybug on climate change and a lack of quality seeds, adding that the current seed varieties were released in 1989.

“The mealybug is not a new pest but was not an important pest in cotton. But with the recycling of cotton seeds and climate change, the pest is now a serious threat to cotton and pawpaw crops in Central and Coast regions,” Waturu said.

He said it is difficult to control the pest because it is sticky so farmers need to mix pesticides with white oil to suffocate it.

“This is becoming very expensive for farmers who are hardly making any money due to the bollworm attack,” Waturu said.

He spoke during a field visit to Mwea. Farmers have been recycling seeds from the ginneries and this has hurt production in Kenya, Waturu said.

Naomi Kamau, director of Fibre Crops at the Agriculture and Food Authority, said Kenya is currently producing 10,000 bales per year against a demand of 140,000 bales.

Kenya's cotton exports are valued at Sh1 billion, yet the industry can earn Sh9 billion across the value chain.

On June 21, President Uhuru Kenyatta launched the revamped Rivatex with a capacity to process 100 bales per day.

Previously, the company was doing 10 bales per day. Uhuru said the firm will benefit more than 500,000 cotton farmers across the country and will enable at least 3,000 youths to get jobs. The President urged Kenyans to consume and use products made in Kenya.

“Let us encourage each other to proudly wear Made-in-Kenya garments,” Uhuru said.

Waturu said this will require farmers to increase production since there are four other cotton ginneries that will require the produce.

He urged the government to commercialise the high-yielding Bt cotton so farmers can increase productivity and meet the demand.

At the moment, farmers get one to 10 bolls from each cotton plant, while from the GM cotton, they can harvest a maximum of 35 bolls from one plant, Waturu said.

He raised concerns that firms such as EPZ get raw materials from India and China, yet Kenya has the capacity to produce its own, then sell it to other countries.

“India, which is among the highest cotton producing countries in the world, does 35 million bales per year with 98 per cent being GM cotton," Waturu said.

“The new Bt cotton variety will play a role in the seed system in the country, and will help farmers reduce the use of pesticides as they will only be required to spray three to four times in a season, unlike currently where they do 10 to 12 sprays.”

“The ban on GM products should be lifted so farmers can access the GM seeds come April 2020,” he said, adding that this will reduce the pesticide residue going into the environment.

Dr martin Mwirigi of the Kalro Biotechnology Centre in Kabete said GM is the most tested technology in the world to ensure safety to both human and the environment.

“The discussion on the adoption of GM cotton was started 16 years ago and it is going on to date. I want to assure Kenyans that biotechnology as a science has been there for long. It has been used to get vaccines in medicine. In agriculture, it helps shorten the period in breeding from maybe 10 to three years,” he said.

It appears the government is offering none of these.
Opinion
3 years ago
Post a comment
WATCH: The latest videos from the Star
by AGATHA NGOTHO Science Writer
Central
23 July 2019 - 00:00
Read The E-Paper