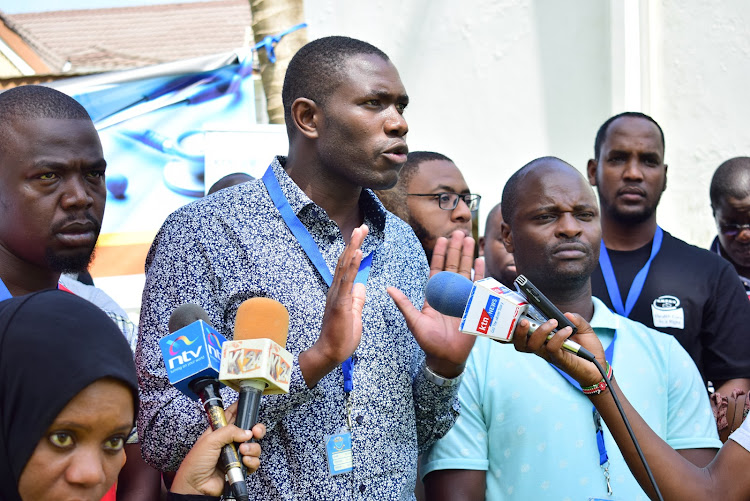 Doctors warned on Saturday that they will not tolerate intimidation by governors.

Kenya Medical Practitioners and Dentist Union secretary-general Dr Ouma Oluga said they have been dismayed with what has happened in Kirinyaga and Laikipia counties.

Laikipia Governor Ndiritu Muriithi dismissed 61 doctors who went on strike for over a month, whereas his Kirinyaga counterpart Anne Waiguru has also threatened to take action over the striking doctors in her county.

Speaking to the press on the sidelines of the KMPDU annual delegates conference in Mombasa, Oluga accused governors of having an inferiority complex and being ignorant to health matters.

“The county governments are mismanaged; governors are being misadvised. They have refused to engage with employees and this is unprecedented in labour history,” he said.

Oluga said what is happening in Kirinyaga and Laikipia counties is a lockout.

In Laikipia, doctors went on strike on June 3 protesting failure by the county government to implement their collective bargaining agreement and effect promotions.

KMPDU members also demanded to be placed in the right job group and paid arrears arising from delayed promotions.

However, Governor Ndiritu went ahead and dismissed 61 doctors and announced that they will advertise the vacant positions.

“We are dismayed by what has been going on in Laikipia where the governor has been comparing the doctors with the number of facilities,” Oluga said.

“They are saying they have 80 facilities and 100 doctors.  They say they want to reduce the number of doctors to match the number of facilities.  This is idiocy of the highest level.”

Oluga said Kenyatta National Hospital has 1,200 doctors but they are still not enough.

“In Berlin, Germany, they have a hospital with 3,600 doctors, the country’s largest hospital. Therefore, we cannot sit down and continue engaging in this kind of ignorance,” he said.

In Kirinyaga, doctors called a strike on May 20, complaining of poor conditions at Kerugoya County Referral Hospital saying it was dirty, had dysfunctional machines and lacked reagents for laboratory tests.

However, a court declared the strike illegal and unprotected and allowed Governor Waiguru to take disciplinary action against the health workers.

Justice Nzioki wa Makau of the Employment and Labour Relations Court said the Labour Act requires medics to provide essential services, therefore, industrial action should be the last resort only taken when all other avenues for dispute resolution have been exhausted.

Oluga, however, said Kirinyaga and Laikipia residents should hold their governors accountable.

Governors in counties affected by the nurses’ strike have been asked to embrace dialogue instead of using intimidation and threats. Patients in ...
Counties
3 years ago
Post a comment
WATCH: The latest videos from the Star
by CHARLES MGHENYI Chief Correspondent, Coast Region
Central
22 July 2019 - 00:00
Read The E-Paper