Farmers come up with innovative solutions to monkey menace

The farmer uses a mirror and bait to ensnare the monkeys 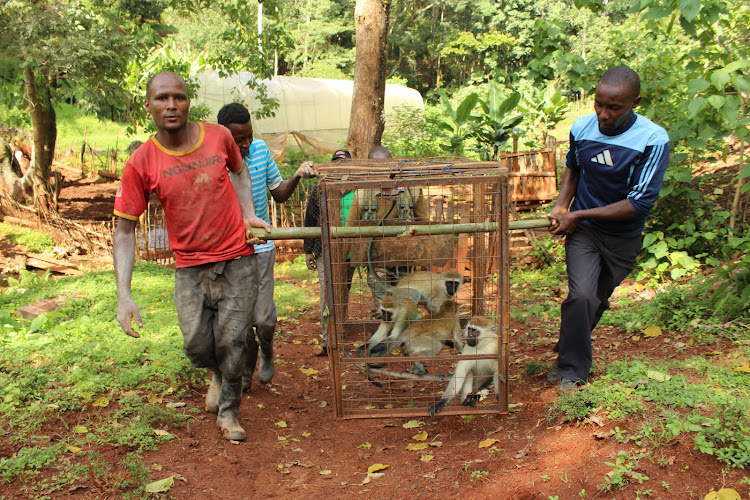 Monkeys are wreaking havoc on crops in Nyeri county, forcing farmers to come up with innovative suggestions -including birth control - to end the primate menace.

Paul Kamuya has invented a contraption that can trap scores of vervet monkeys.

The trap, made of wire mesh and timber, has two chambers. The monkeys are trapped in the first chamber and held in the second chamber.

“We have as you have seen been able to capture quite a number of these primates. These animals are very destructive,” he told the Star at his farm in Gatitu, Nyeri Central, on Saturday as he handed over the trapped animals to Kenya Wildlife Service (KWS) officials for relocation.

The farmer uses mirrors and bait to ensnare the monkeys.

Kamuya called for a meeting of county government officials, MPs and KWS to find a permanent solution to the problem.

He has 50 macadamia trees which could fetch him over Sh300,000 per year. His 1,000 banana stems can fetch him more but the animals have reduced him to a pauper.

He estimates his losses to be Sh1 million annually.

Kamuya said he is ready to donate a holding ground for the animals so that school children can view the monkeys at a fee.

“I will be holding them here so that the KWS does not need to relocate them all the time to forests. They can remain right here. We can feed them and keep them out of our farms,” he said.

He said there is a need to come up with a better way of making the traps available to all farmers. “I am ready to cooperate with them so that they can capture as many monkeys in as many places as possible.”

Farmer Charles Ngatia asked the KWS to control the birth rate of as primates are fast breeders.

“Males can be castrated before relocation while birth control drugs can be administered on females,” he said.

“I am one of the affected farmers and have not been able to put food on the table because of the monkey menace,” he said.

Colleague Martin Njagi said the trap was the way to go.

County KWS warden Paul Wambugu said monkeys were a problem affecting all farmers in the county as it provided forest cover, the ideal environment for the primates.

“We have 38 per cent tree cover in Nyeri and that is what causes this problem of monkeys and baboons because they have good habitat where they are able to reproduce at a very high rate,” Wambugu said.

He also preferred the trap as it ensnared the animals without inflicting injuries on them before relocation to game parks.

He thanked Kamuya for not killing the animals and alerting the KWS officials.

Wambugu asked farmers not to view the primates as enemies as they earn the country foreign exchange.

Post a comment
WATCH: The latest videos from the Star
by EUTYCAS MUCHIRI Correspondent, Nyeri
Central
10 June 2019 - 00:00
Read The E-Paper