• Group recycles paper by mixing it with charcoal and charcoal dust to make briquettes.

• They make compost manure from organic waste and melt metal and glass to make other products. 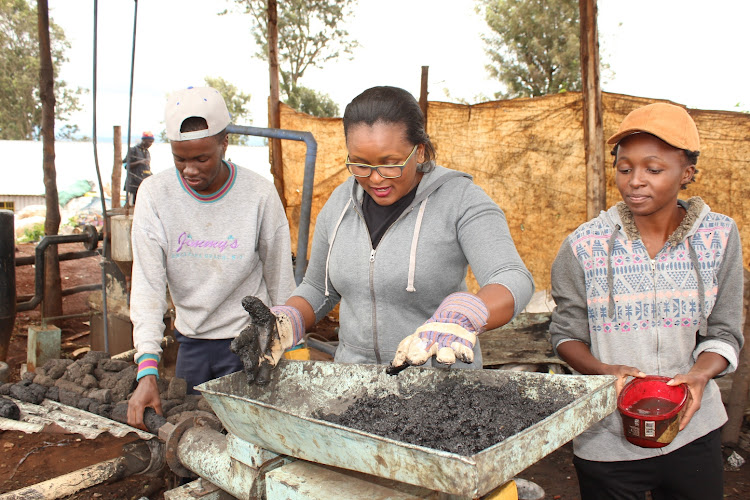 A local group is working with the county government of Nyeri and Penn State University in the US to reclaim the town's main dumpsite.

The county government plans to turn the Asian quarters dumpsite near Nyeri central business district into a bus park.

Fencing of a section of the land has already started.

Group spokesman Boniface Ndegwa said they turn trash in the dumpsite into cash by making various items under a programme called Turning Trash into Treasure.

“This programme finds value in trash, creating employment for destitute families as well as reclaiming this land that has been turned into a dumpsite,” Ndegwa said.

The group recycles paper by mixing it with charcoal and charcoal dust to make briquettes. They make compost manure from organic waste and melt metal and glass to make other products.

Plastic and rubber are also recycled.

Using locally made machines, they produce 10 bags of briquettes a day.

“Our market is growing and we are planning to increase our production from 10 bags in a day to 80 bags and 30 barrels of petroleum from plastic waste,” he said.

They sell petroleum and briquettes locally to learning institutions to use as fuel.

Briquettes are more economical, efficient and environmentally friendly. They go for Sh1000 per 50kg sack.

“These briquettes are smokeless, durable and are thus twice as good as the traditional charcoal. They cut use of charcoal by half and are therefore efficient and economical to use,” Ndegwa said.

But the group faces challenges of lack of proper equipment, resulting in low capacity.

Ndegwa said they are unable to acquire the necessary operation permits due to cost.

Other challenges are lack of amenities such as water and electricity to enable them venture into mass production.

Sjoerd  Duiker, a professor of soil management from Penn State University, said they are looking at options of  designing landfills as part of the waste management project.

The professor is in the county to demonstrate to the group on how to make landfills.

“Currently the garbage is dumped in an uncontrolled manner and everything is mixed and the idea is first to remove part of the waste that can be recycled and reused,” Duiker said.

The professor is leading a group of university students in the dumpsite as part of their learning project.

Duiker said after recycling reusable waste, there are plans to incinerate whatever is left and the ash will be safely stored in a landfill.

Part of the dumpsite will be turned into a public park.

Post a comment
WATCH: The latest videos from the Star
by EUTYCAS MUCHIRI Correspondent, Nyeri
Central
27 May 2019 - 00:00
Read The E-Paper