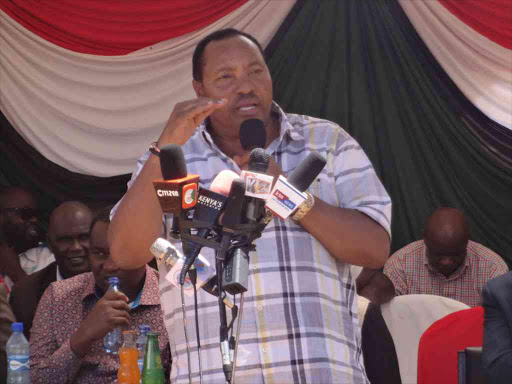 Kiambu residents and MPs have opposed the increase in land rates.

During a meeting in Kiriko village, Gatundu North, the MPs faulted the county for overlooking public participation by implementing the “unlawful and improbable rates”.

The lawmakers said if the county implements the Kiambu County Valuation Roll – the document indicating details of the properties that are subject to tax – land rates will go up by 1,000 per cent.

Thika MP Patrick Wainaina said they support the county’s efforts to broaden its revenue base, but they will not watch as residents are subjected to “oppressive” rates.

“The county must respect the law and give a chance to residents and leaders to give their suggestions over the new rates,” he said.

“It must be reasonable when setting new rates. Some of the rates that are being charged are unrealistic and most residents cannot afford them.”

Waititu defended his administration, saying he was implementing what had been started by his predecessor William Kabogo.

He said the land rates were raised in 2015 and public participation was conducted in all 12 subcounties.

“We have, however, suspended the new rates and kicked off public participation forums in all constituencies so we can reach a consensus with all stakeholders,” the governor said.

Kiambu MP Jude Njomo said the county must hold consultative meetings with residents and leaders to reach a consensus.

He said the rates are scaring away investors. “Even natural justice dictates that you cannot increase rates by over 100 per cent,” Njomo said.

“What the county government is doing is enslaving residents with hefty rates and putting investors at bay. These rates must be reviewed downwards.”

“These rates are punitive and should be stopped, pending review. The county should revert to the old ones for now,” Njomo said.

Residents told the Star that they will not comply with the new rates as they are illegal. They said no public participation took place.

The residents said the Gazette Notice 11/372 that has legitimised the rates must be withdrawn and all stakeholders consulted.

“We won’t pay these punitive rates because for one they are illegal and we don’t see or feel the impact of the revenue raised by the county,” Ruiru resident Joel Mungai said.

KAM chief executive officer Phyllis Wakiaga, in a letter dated January 18 and copied to Lands executive James Maina, called for suspension of the new rates until consultations are held.