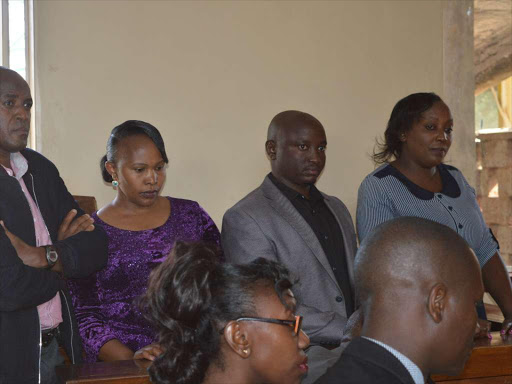 He fled after he sued his employees at Gakuyo Real Estate and Ekeza Sacco, which he owns, the court heard.

Lawyers Steve Kabucho and Benard Muriuki representing the employees said the four were sacked in October last year and police started investigating them.

They have been reporting to the DCI every two weeks but efforts to have Kariuki appear have been futile.

Kariuki is the bishop of Chosen Calvary Centre Ministries in Thika town. On Sunday, he slipped away after sacco members camped outside his church, demanding their savings.

The charge sheet stated the first accused, Wanjiku Muriithi, at the Thika Lands registry procured title deed registration number Gatuanyaga/6538 by falsely pretending that it was transferred by Kariuki.

She was also accused of willfully procuring a logbook for a Prado, motor vehicle registration number KCH 363H, pretending she was given authority by Kariuki. She faced a third count of stealing a Sh6 million vehicle.

Kariuki Mwangi was accused of procuring for himself title deed registration number Kiambu/Gatuanyaga/6458 by falsely pretending that he had bought it from one Mary Njeri. He was also charged with uttering a false document.

Faith Njeri and Muthii Mwea were jointly charged with conspiracy to defraud. The court heard that between October 4 and 8 last year, at Thika Lands Registry, they conspired to defraud by registering 10 parcels, pretending they were transferred to them by Kariuki.

The accused denied the charges and were freed on a cash bail of Sh150,000 pending hearing April 2.

PS Susan Mochache in the State Department of Cooperatives has said 53,000 members of Ekeza Sacco must wait till February 21 to know about their savings. That’s when a report will be presented at a meeting.