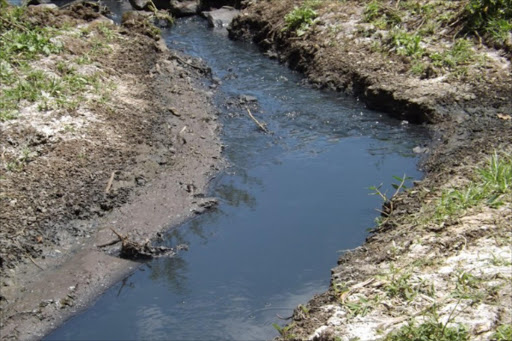 They say the sewage flows from an old sewerage plant in Pilot estate, Thika town.

The sewerage carries effluents from industries and raw sewage from Ofafa, Starehe and Majengo estates.

The residents say they now fear an outbreak of diseases.

They say their efforts to get help from relevant authorities have been futile.

“This issue must be addressed immediately because we now fear drawing water from the river over health concerns. It is now hard to even get water for our animals,” resident Jacqueline Maweu said on Monday.

Maweu said they are forced to buy water at Sh5 for a 20-litre jerrycan.

“We walk to for long distance to look for water. We hope all relevant and concerned bodies will step in and resolve the issue soon enough,” she said.

Some of the farmers continue watering sugarcane and banana plants from the contaminated channel.

Kiambu county Environment executive Esther Njuguna said they are looking in to the matter urgently.

She said the county is establishing a new sewerage system for Thika subcounty to avert similar cases in the future.

County environment director Andrew Kimani said the problem at the sewerage plant started after a transformer that serves it was vandalised.

He said the generator is no longer functional.

Kimani said they have dug a pond where raw sewerage will be stored should there be a problem with the transformer again.

“We now have a new transformer in place.”