Wamatangi flags off County KICOSCA team after protest from players

More than 35 Counties are expected to participate. 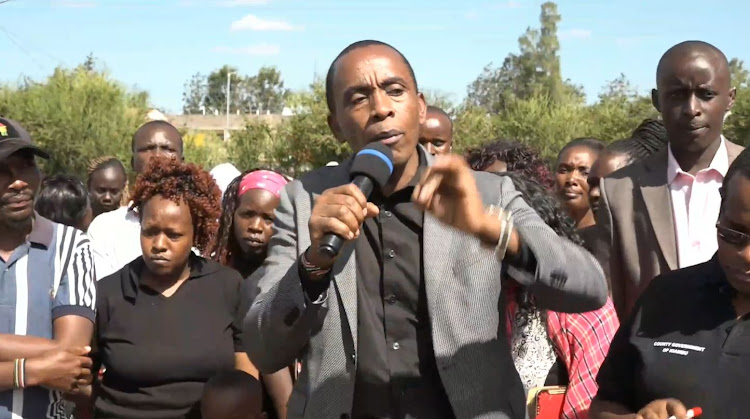 Kiambu Governor Kimani Wamatangi addresses his supporters in Mwihoko, Kiambu county during the launch of UHC in the area. He said his administration is committed to fighting corruption.
Image: AMOS NJAU

Kiambu governor Kimani Wamatangi on Friday flagged off the Kiambu County team to participate in the Kenya Inter-Counties Sports and Cultural Games (KICOSCA) after facing off with the players on Wednesday afternoon.

The players had accused the governor of micromanaging them and reducing the number of teams without involving them, a move that forced them to storm the governor's office in a peaceful demonstration.

The governor had reportedly cancelled the number of teams expected to travel to Kisumu to 14 from 21.

The team officials and the sports minister would later solve the stalemate and they were assured of the governor's support.

The governor later flagged off the teams and assured them of support.

He reinstated the teams back to 21 to avoid the standoff.

More than 300 participants are expected to depart from the County on Sunday ahead of Monday's games.

“In this year's edition of the games, Kiambu County Government has sponsored over 300 county employees to take part in games that will kick off on Monday, the 16th of January,” Wamatangi said.

The overall team captain, of Kiambu County, told the Star that the governor had claimed that there were no sufficient funds to fund the activity a move that forced them to protest.

“We had decided we will not participate in those games in case the governor fails to finance all the teams we had presented. We were shocked that the governor had selected 14 teams to participate instead of 21 but now we have been approved," She said.

Kiambu MCA who has sought anonymity has told the Star that it took the intervention of the sports minister in Kiambu as the governor had vowed not to fund all those who were selected considering some were supporting his rivals during the last election.

The MCA requested the governor to ensure the County operations and structures are well followed to avoid micromanaging the activities.

“Wamatangi should stop micromanaging every department, whatever is being experienced was never felt in previous administrations,” MCA said.

President William Ruto who is on an extensive tour in Kisumu County will preside over the opening of the games accompanied by governor Anyang Nyong’o.

The much-awaited competition will take place in Kisumu County from January 15 to 21.

A total of 32 counties have since confirmed their attendance for the ninth edition of the inter-county games.

More than thirty-five counties are participating in this year’s edition of the KICOSCA games.

Nairobi governor Johnstone Sakaja on Thursday also flagged off the Nairobi team and urged them to maintain discipline.

Governor Sakaja noted that sports are extremely an important economic frontier. He assured the team of his full support and promised them that they will be fully facilitated.

Governor Sakaja said that his government is keen on bringing back the lost glory in sports.

He promised that City Stadium and all other sports facilities in the city will be worked on.

Said Deputy President Rigathi Gachagua will preside over the event on Monday.
Counties
3 weeks ago

I'm deeply disturbed by insecurity; It is government's responsibility to protect citizens.
Counties
4 weeks ago

Preparation for Kicosca games kicks off in Kisumu, 8,000 participants expected

Nyong’o said they have identified the venues and facilities that will offer accommodation.
Counties
3 months ago

32 counties to feature in this year's Kicosca games

Kabiri said teams will only be allowed to enter players only in seven days extravaganza.
Sports
1 year ago
Post a comment
WATCH: The latest videos from the Star
by AMOS NJAU @Njaumburuh
Counties
13 January 2023 - 20:18
Read The E-Paper