No more smoke, long treks to fetch firewood, thanks to biogas

Lilian Kimeli from Koibarak village says the initiative has come at the right time; it will also secure state resources 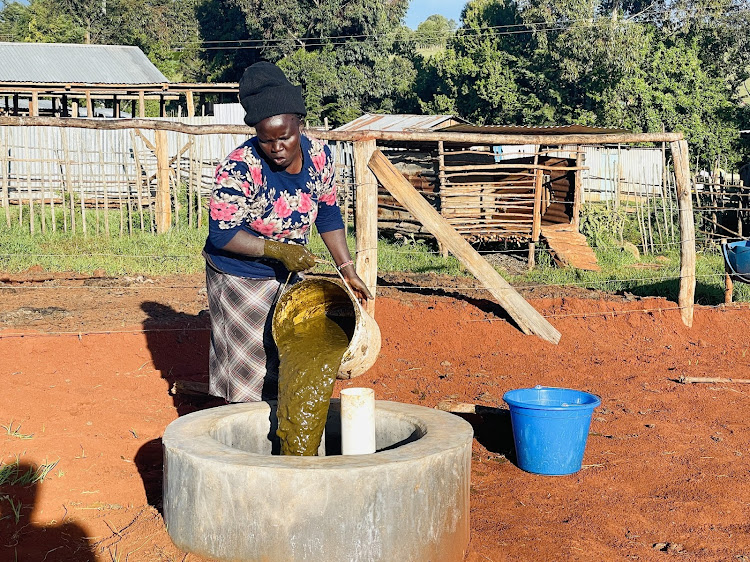 Lilian Kimeli feeds her biogas digester. She is among families who have transitioned into low carbon energy under the Greening Kaptagat initiative.
Image: GILBERT KOECH

It is some minutes to 1 pm and Lilian Kimeli, a resident of Koibarak village, is racing against time to prepare lunch for her family of five.

However, today, there is no smoke billowing from her kitchen roof as has been the case for years.

A few meters from the kitchen, two dogs lie idle wondering when smoke will billow because the smoke signalled lunch preparation was underway.

But unknown to them, Kimeli has just adopted biogas that she uses for cooking.

“Biogas does not emit smoke like firewood,” she says.

Kimeli says she no longer has the stress associated with fetching firewood.

She says she normally treks for a kilometre to get firewood.

“I finish cooking quickly and comfortably and my cooking pots are now clean,” she says.

Kimeli is part of 20 households in Kaptagat that have transitioned to low-carbon energy use.

The World Wide Fund for Nature-Kenya, through the UK PACT Greening Kaptagat project, is installing the biogas units in their homesteads.

The project is being rolled out in 16 subcounties bordering forest resources.

Over 1,000 people living around the forest will benefit through the establishment of agroforestry and clean energy solutions within the forest-based landscape, with over 1,000 hectares of deforested and degraded land under restoration.

The Kaptagat landscape is part of the Cherangany-Elgeyo Hills Ecosystem, an important water tower, which has over 286 springs feeding into the Kerio and Nzoia Rivers.

The two rivers drain into Lake Turkana and Lake Victoria.

Under the Greening Kaptagat project, about 200 households in Kapkoi also benefitted from quality water access following the installation of a solar-powered water pump and the construction of 50,000 cubic metre water tanks earlier this year.

Kimeli says biogas has come at the right time.

She says it does not emit smoke, and the move will help the government secure the country’s forest resources.

Kimeli reveals that one trip of firewood strapped on her back can last for two days.

She says with her four cows, she will no longer have to make trips fetching firewood.

Kimeli’s biogas has a capacity of 10 cubic meters.

She has been taught how to feed the biodigester by mixing water with cow dung and how to operate it.

Kimeli says apart from addressing air pollution, she now has enough time at her disposal to attend to other chores.

Wood energy provides 70 per cent of Kenya’s national energy needs and it is expected to continue as the country’s main source of energy for the foreseeable future.

A comprehensive biomass study undertaken in Kenya in 2000 revealed that the principal sources of fuel wood are the farmlands with a production of 84 per cent of the total wood fuel requirement.

Greening Kaptagat Project officer Gideon Kibusia said those with biogas have been trained on how to feed the digester and basic operations.

Before the biogas was installed, communities were enlightened.

He said those who need to learn about how the project works are also invited to visit farms that already have them.

“It is a demo site for all to come and learn,” he said.

Kibusia said those with biogas are not allowed to spray cattle before feeding cow dung into the digester.

This, he said, is because the chemicals will kill the bacteria.

Sly from the digester can be used as manure.

Kibusia said WWF-Kenya support’ is 70 per cent while the other 30 per cent is supported by the farmer.

“Farmers provide materials and excavate the site,” he said.

WWF-Kenya pays for the labour.

Kibusia said the beneficiaries have to be a member of the Community Forest Association.

“They have to make a formal application and the committee will vet them,” he said.

At Jonah Cheruiyot’s compound in Kimori, Elgeyo border, another biogas with a capacity of 12 cubic meters has been installed.

He says the biogas has been handy since his family of eight no longer treks long distances in search of firewood.

Cheruiyot who has seven cows says there is no smoke emitted.

A biodigester works by creating an anaerobic environment that is optimum for bacteria to break down organic material into sludge, water, and methane gas.

The methane gas is what most people call biogas and it is harnessed and used for cooking.

A minimum of two cows in a zero-grazing unit can provide sufficient feedstock for a biogas plant.

The World Health Organization has been attributing the use of firewood to cook to millions of deaths annually.

WHO says household air pollution is generated by the use of inefficient and polluting fuels and technologies in and around the home.

Such technologies WHO says, contain a range of health-damaging pollutants, including small particles that penetrate deep into the lungs and enter the bloodstream.

WHO says in poorly ventilated dwellings, indoor smoke can have levels of fine particles 100 times higher than acceptable.

Exposure is particularly high among women and children, who spend the most time near the domestic hearth.

WHO says the reliance on polluting fuels and technologies also requires significant time for cooking on an inefficient device, and gathering and preparing fuel.

The United Nations Environment Programme concurs with WHO.

Air pollution is the greatest environmental threat to public health globally and accounts for an estimated seven million premature deaths every year. 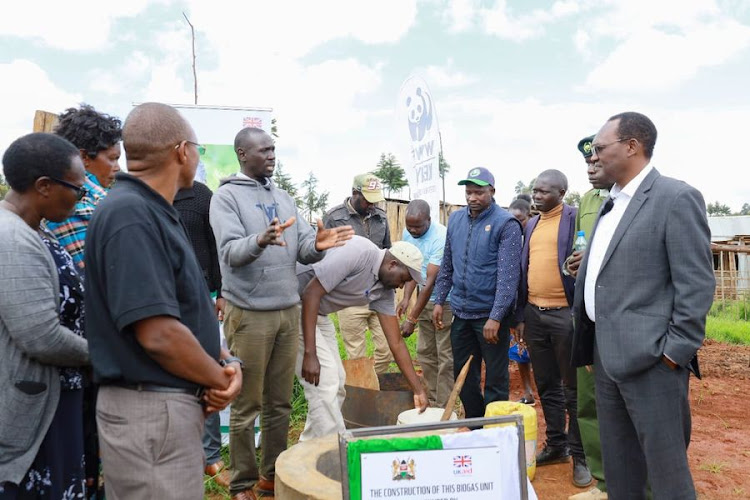 UNEP says ambient (outdoor) air pollution in both cities and rural areas was estimated to cause 4.2 million premature deaths worldwide per year in 2016.

The adoption of biogas has also helped the government to conserve the environment.

Much of the closed canopy forest has in the recent past been depleted due to internal and external influences.

The losses of forests and associated resources have had far-reaching negative effects on the country’s economy and the welfare of Kenyans.

Some of the consequences include an inadequate supply of water,  environmental degradation and loss of biodiversity among others.

Recently, however, the government announced that the country’s forest and tree cover had improved.

The country is already working towards achieving a 30 per cent tree cover by 2050.

As part of conserving and managing the available resources, KFS has been promoting the use of modern technologies such as biogas.

The government has been encouraging more Kenyans to adopt renewable energy as part of cutting greenhouse gasses.

“This is the time to transition from dirty energy (fuelwood) to clean energy,” he says.

Kiptoo says the new direction will boost the government’s efforts to curb emissions.

The government has already developed a road map of how it intends to curb greenhouse gasses.

Kenya’s updated Nationally Determined Contribution increases mitigation commitment from 30 per cent in 2016 to 32 per cent by 2030.

NDCs embody efforts by each country to reduce national emissions and adapt to the impacts of climate change.

The Paris Agreement requires each party to prepare, communicate and maintain successive NDCs that it intends to achieve.

Parties shall pursue domestic mitigation measures, to achieve the objectives of such contributions.

Kenya will use seven sectors to lessen greenhouse gas emissions.

This is in response to decisions adopted at the 19th and 20th sessions of the Conference of the Parties to the United Nations Framework Convention on Climate Change.

In 2015, Kenya Committed to cutting emissions by 30 per cent.

The country then said its greenhouse gas emissions were relatively low, standing at 73MtCO2eq in 2010, out of which 75 per cent are from land use, land use change and forestry and agriculture sectors. 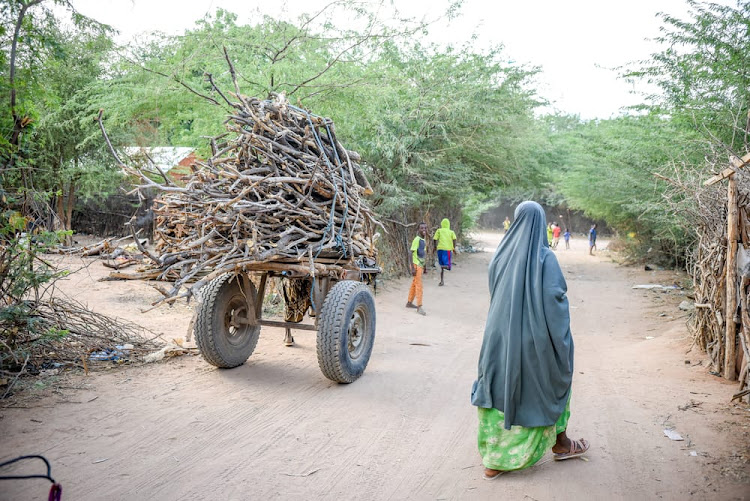 A donkey cart carrying firewood in the streets of Dagahaley camp, in February Image: STEPHEN ASTARIKO

How Kenya plans to benefit from Sh10 trillion climate fund

As Kenya seeks to become industrialised by 2030, the environmental effects of economic growth are now giving economists sleepless nights.According ...
News
6 years ago
Post a comment
WATCH: The latest videos from the Star
by GILBERT KOECH News Reporter
Counties
23 September 2022 - 22:00
Read The E-Paper