He said Kitui branch was intact and there were no threats of any fall-outs, cracks or divisions. 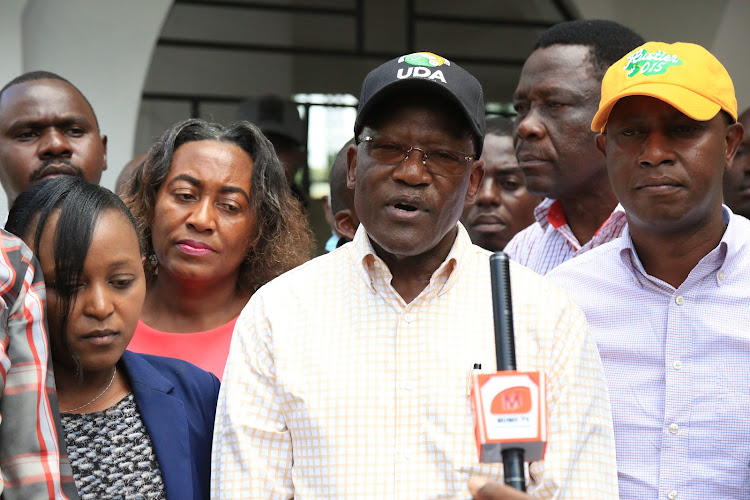 UDA chairman Johnson Muthama on Thursday chaired a meeting in Kitui town to calm fears that there was wrangling at the party's local branch.

Muthama told newsmen on the sidelines of the meeting that brought together top UDA leadership in Kitui, as well as 2022 aspirants, that claims the party fraternity was divided were untrue.

He said Kitui UDA fraternity was intact and there were no threats of any fallings-out, cracks, or divisions.

“There have been allegations that Kitui people and leaders in UDA are not working together. I want to erase those doubts and allegations and put it very clear that UDA is intact and united in Kitui,” Muthama said.

The meeting brought together more than 200 UDA leaders from across Kitui county seeking elective positions, led by the party’s gubernatorial candidate Jonathan Mueke.

It was triggered by allegations of shadowboxing and squabbling among the UDA leaders.

There have been incidents where some leaders were accused of unfairly pocketing money donated by Deputy President William Ruto meant for boda boda people and small traders.

But on Thursday, Muthama denied the existence of divisions within the UDA fraternity, saying the meeting was meant to find a common trajectory for UDA in Kitui.

“We need to move together and speak in one voice. We have a singular mission to unite our people,” he said.

“Our meeting is about discussing our unity and laying clear our strategies on how we are going to popularise UDA."

Mueke said UDA had become very popular in Kitui, adding that it had more 2022 election aspirants than any other party in Kenya.

“UDA has now gotten a strong foothold in Kitui county. We have come together as a family so that we can agree on how to work together as the UDA family,” he said.