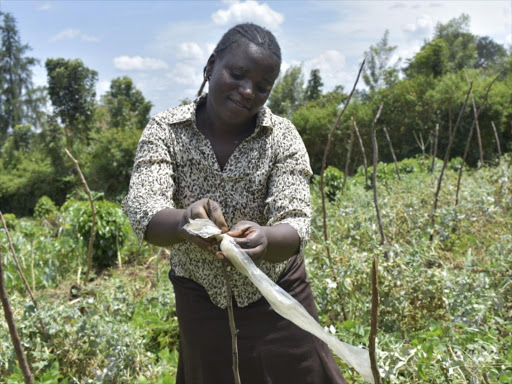 Consolata Khaemba, a 33-year-old mother of four from Kamtion village in Bungoma, is smiling at the work of her hands.

For years, she has enjoyed farming with a sense of belonging and as part of the local culture. But now, she is also earning an income from her efforts.

When she heard about Kilimototo, a social enterprise for farmers, she knew she wanted to be part of the success.

Kilimototo is an organisation where the founders work with children in different capacities in marginalised communities to find tangible solutions to advocate for the rights of children. They also work with women on wealth creation to curb their day-to-day problems of fending for their families.

The organisation works with rural women in planting french beans, sugar snaps and snow peas, which are sold in the local and European markets.

Through their outgrower model, Kilimototo prefers to work with women, who are mainly the caregivers to their children.

Kilimototo has established women-centred horticulture production, providing agronomical and technical knowhow to the women and link them to sustainable, negotiated markets for their produce.

Khaemba had to meet all criteria required by Kilimototo including having a piece of land, access to irrigation water and her willingness to work with Kilimototo to make a living.

“An agronomist visits and trains us, working closely with all farmers throughout the process from planting, application of fertilizer and harvesting,” she said in an interview after receiving her payment.

The farming process takes 48 days from planting to harvest after which they are paid instantly. The produce is repackaged for the markets and transported by road to various destinations.

Kilimototo provides farm inputs to the farmers although they are later able to support themselves as they earn a decent return from their produce. The funds invested are then used to reach more women with the hope of reaching 3,000 rural women in two years.

The social enterpreneurship began last year with just six women and has since increased to 300. Through a partnership with a buyer who is an exporter for the produce, Kilimototo is able to work through the challenges of production.

So far, some 20 tons of the harvests have ben sold in London as well as local markets, giving nearly 100 women a regular income from their farm work.

Among their challenges is how to scale up the agribusiness due to inadequate funding for inputs, inspite of great interest from farmers.

“The organisation is in the process of seeking sustainable partnerships with like-minded individuals (investors) and institutions, to address this situation,” revealed Gilbert Ngaira, the founder of Kilimototo.

His main objective, himself having grown on wellwishers’ efforts to go through school, is to increase literacy for school going children by giving an early start to children.

He remembers the very tough, unforgiving life in the streets, which he resolved should never happen to children. He plans to set up model preschool centres that use the internationally recognized Early Childhood Center models within the Bungoma community.

“I want less children working to make ends meet. Schools will also ensure the protection of children by ensuring reduced child labour, increased literacy and reduced child migration to urban centers in the hope of getting better schooling. Relatives and friends end up using these children for their own gains as domestic workers,” he said.

Ngaira has employed two agronomists to ensure that all produce is grown to international standards. They also train the women every quarter on best practise in horticulture farming.

Ngaira is of the opinion that wealth creation and education are directly linked. The absence of one leads to the other.

Every family living below a dollar a day requires education and exposure to be liberated.

Ngaira has chosen the path of agriculture and early childhood education to create the liberation required to raise rural women out of poverty.