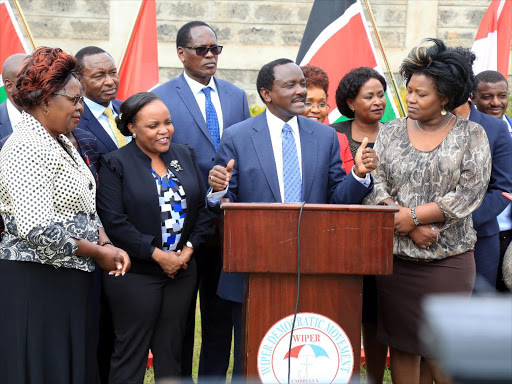 Women parliamentarians ran a vigorous last minute campaign to steer support for the two-thirds gender rule Bill, which will placed for second reading in parliament today.

“It is a constitutional requirement that we must meet at all costs. We are already late on this. The time is now to ensure fair gender representation in parliament,’’ Kirinyaga woman representative Purity Ngirici said.

This will be the second time the Bill will be coming to Parliament after MPs rejected it in May 2016 despite intense lobbying.

The parliamentary women association and the National Gender and Equity Commission (NGEC) took media through the cost implications of implementing the two-thirds gender rule.

Taxpayers will shoulder an extra Sh482.1 million every year to implement the law sponsored by Aden Duale, Majority leader in Parliament.

According to Institute of Economic Affairs CEO Kwame Owino, the cost is less than one per cent of total government expenditure.

“Each Kenyan will pay between Sh6 and Sh10 per year to pay salaries of 39 women MPs and two more Senators needed to hit one-third threshold. This is on assumption that each of those leaders is pocketing a maximum of Sh980,000 per month,’’ Owino said.

The National Assembly has 76 women, representing 21.77 per cent of total members, a shortfall of at least 39 to meet the required threshold.

The Senate is only two members shy of the constitutional requirement of at least 33 per cent. The House has 67 members.

She cited a UN report released in January that ranked Kenya behind her neighbours.

“The report ranked Kenya sixth in East Africa, behind Rwanda, Uganda, Tanzania, Burundi and even a younger democracy like South Sudan,”Wachira said.

“It is not about women, but fairness to all genders,’’ Kandara MP Alice Wahome said.