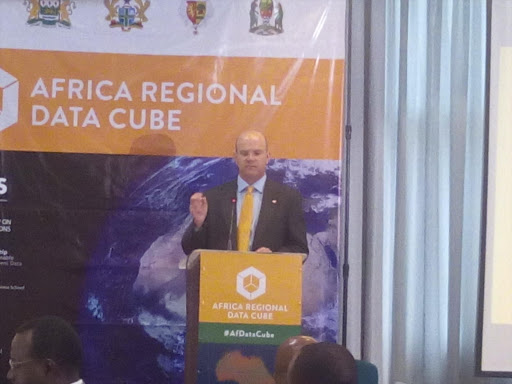 This new tool harnesses the latest earth observation and satellite technology to help these countries address food security and issues relating to agriculture, deforestation, and water access. The data cube will allow the government to understand crop distribution, changing seasons and use of agricultural land in rural areas and protect its forests and water towers.

"We have raised enough money for this project, lets hope it will work. Our aim is not just to change lives of people who will be using this data, but also for economic benefit since many countries use Sh14 billion to 15 billion on data annually. Countries have boundaries but the population keeps growing hence the use of data for monitoring is beneficial," CEO systems engineering office at NASA Brian Killough said.

The system is based on infrastructure that analyses ready satellite data, spatially and temporarily aligned in data cubes, hosted in the cloud. They allow efficient time series analyses such as land change, water extent and quality, agriculture extent and health, permit the use of diverse data-sets via inter-operable methods, and support connections to common analysis tools while reducing the data preparation and management burden on users.

It also allows other global users to develop new core code, share algorithms and provide support for the resolution of problems.Training for African representatives from government ministries, National Statistical Agencies, geographic institutes, research scientists and the civil society has already began so as to ensure total benefit from the data cube.

Chief Administrative Secretary in Environment Ministry Mohammed Elmi said the data cube will not only be useful in attaining food security, a pillar of President Uhuru Kenyatta's ‘Big Four’ agenda, but also ensure all government decisions are driven by data.

"The use of data must be at the centre of improving lives. This will ensure Africa is not left behind in data revolution. User friendly and customisable data will be of great benefit to ordinary people who are feeling the effects of climate change the most and majority of farmers who depend on rainfall agriculture, and deal with any human activities that threaten our existence. That is why Kenya is the only country globally to come up with Climate Change Act 2016," Elmi said.

The open source data cube was developed by the Committee on Earth Observation Satellite in partnership with the Group on Earth Observations, Amazon Web Services and Strathmore Business School. The university has been tasked to host the data for 30 years.