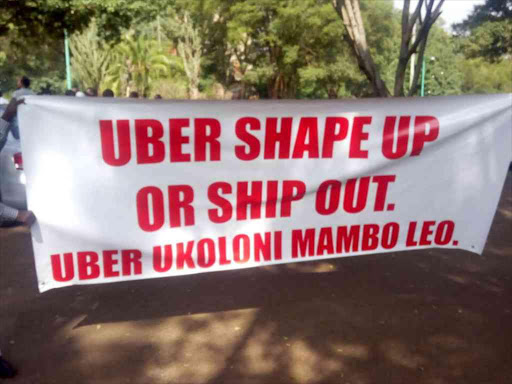 Uber drivers during their demonstration in Nairobi on February 23, 2017. /COURTESY

A meeting was convened on Monday between Uber and its striking drivers in a bid to end the standoff that has disrupted services on the taxi hailing platform for two weeks.

This follows intervention by the Ministry of Transport and the Office of the President which have been roped into the strike due to growing public interest.

Its understood that the meeting will take place at the office of the Transport Principal secretary Irungu Nyakera, although the exact time is unknown.

Uber drivers will be represented by the Digital Taxi Association of Kenya while the mediators include the transport PS and The Presidential Delivery Unit led by Nzioka Waita.

The striking drivers are demanding higher fares, away from the current fare pricing regime which is allegedly configured in Uber's favour.

The taxi-hailing company was charging Sh60 per kilometre, Sh4 per minute of the ride and a base fare of Sh100 after it launched its services in Nairobi in January 2015. It required drivers to pay a 25 per cent commission for each ride taken.

In August last year, Uber effected a fare cut to Sh35 for every kilometre covered and Sh3 per minute, in addition to a base fare of Sh100.

This sparked problems with the drivers since Uber did not review its commissions to match the new fares.

Uber drivers say the move has affected their revenues negatively.

“We hope Uber will agree to revert the fares back to Sh60 per kilometer. If that's not possible we want a deal that will allow us to break even and remain profitable,” Digital Taxi Association of Kenya vice-chairman David Muteru said yesterday in a phone interview.

The PS was not available for comment yesterday, but he had previously urged Uber to critically audit its pricing mechanisms in a bid to address current or future challenges posed by a fluid economic environment.

Nyakera says the revenue loss suffered by drivers in the event of price fluctuations risks pushing them out of business.

“The state is keen on ending the impasse by working towards a compromise package,” The PS said in a statement last week.

Uber has also hinted willingness to settle on a compromise deal.

“We know that recently some driver-partners, in Nairobi, have expressed concerns around their earnings in light of inflation and the increase in fuel prices,” said Alon Lits, general manager Uber Sub Saharan Africa.

“We remain dedicated to listening to our driver-partners, monitoring their economics and carrying forward our conversation with governments to ensure innovation of the transport system in general, but also innovation for the way entrepreneurs build their own small businesses,” he said.