Funds for SGR phase II to be in by January 2016, assures state 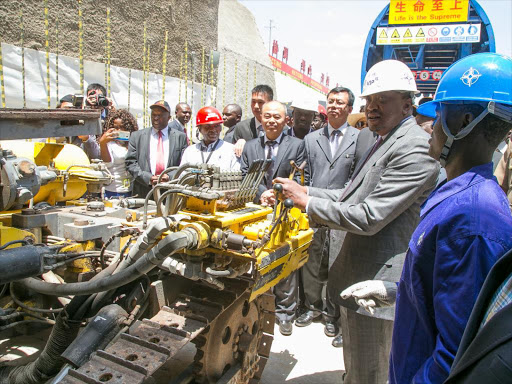 President Uhuru Kenyatta operates a machinery to officially launch construction works of the Phase 2A of the Standard Gauge Railway (SGR) project at Em-bulbul, Kajiado County on October 27,2016.Photo PSCU

The first installment of the Sh150 billion to finance the second phase of the standard gauge railway is expected by January 2017, the government has said.

President Uhuru Kenyatta commissioned the second phase of the SGR at Embulbul in Kajiado county on October 19.

Phase II starts from the West end of the Nairobi South hub (end point of the Mombasa – Nairobi SGR), turns south-westwards through the Nairobi National Park and West past Twala and Ongata Rongai towns.

It will cross Magadi road next to Adventists University of Africa, and Ngong road at Embulbul, and descend into Rift Valley through a tunnel located North West of Ngong hills.

The rail will then proceed North West to the proposed industrial parks at Mai Mahiu and Suswa, and cross B3 at Duka Moja.

“The construction is expected to take 54 months informed by the length of time to be taken drilling the Ngong hills tunnel,” Maina said in Nairobi yesterday.

The Exim Bank of China is expected to release the first installment, 30 per cent of contract price, on time.

“It will be fast-tracked to serve proposed industrial parks planned for locations within Navaisha subcounty and Narok county, specifically Mai Mahiu and Suswa,” Maina said.

He said an environmental and social impact asessment along the entire route was completed and report submitted to the National Environment Management Authority, with response “expected any time now”.

“Stakeholders are invited to read the report and make submissions to Nema,” he said. He was speaking during a presentation to update the public on the progress of the project.

He said civil works for the Sh327 billion Mombasa-Nairobi line, which started on December 12, are 98 per cent complete with the entire track already laid.

Maina said locomotives, freight wagons and coaches have been ordered from China, and will start arriving in January 2017.

Test runs will start immediately with the commissioning expected in June 2017, while commercial operations will kick off in January 2018.

A bridge will be built at the Nairobi National Park in three stages, to ensure adequate space is left for wildlife and tourists.

The first stage, 2.2km, will be near the northern boundary of the park where a wire mesh fence will be erected, enclosing the working area, while leaving the rest of the corridor free for passage of wildlife.

Post a comment
WATCH: The latest videos from the Star
by WEITERE MWITA @MwitaMartin
Counties
03 December 2016 - 03:00
Read The E-Paper