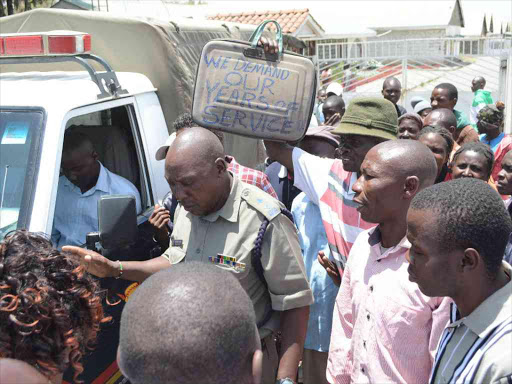 Some of the more than 2,000 sacked workers from Karuturi Flower fi rm in Naivasha hold a peaceful demonstration outside the company’s offi ces demanding their Sh227 million dues after the farm was closed down fi ve months ago over unpaid debt /GEORGE MURAGE

The process of selling off the largest flower farm in Naivasha, Karuturi, has kicked off, with a new liquidator moving in.

More than 2,000 former workers of the company camped outside the farm demanding their dues as the new managers were ushered in by police.

This came as a humanitarian crisis hit the camps hosting the sacked workers after water and electricity were disconnected.

The farm was placed under receivership early this year for failing to pay a bank debt.

Addressing the workers, the Kenya Plantation and Agricultural Workers Union representative in Naivasha, Ferdinand Juma, said they were kept in the dark about the workers' fate.

He said the union is ready to meet with the new receiver managers, and its wants to know what plans they have for the workers who were laid off.

“The workers are not represented under the new liquidator managers, but they are part and parcel of this farm as they are owed millions of shillings,” Juma said.

He said the move to cut off water and electricity supply for the staff quarters has worsened the situation.

“This could be one way of kicking out the workers, and our fear is that this could backfire and cause a disease outbreak,” Juma said.

Six months since Karuturi was placed under receivership, he said, no one has briefed the workers on their fate.

“There is information that the farm will be sub-divided and sold into plots, and we want all our dues paid before this is done,” Juma said.

Samuel Otieno, a worker representative, said they do not have faith in the new liquidator managers.

“The workers are very peaceful waiting for their dues and we are demanding that the workers get their rightful dues before the farm is sold,” he said.

A senior police officer, who addressed the workers, told them to keep off the Moi South Lake Road near the company's premises as the new managers addressed their issues.