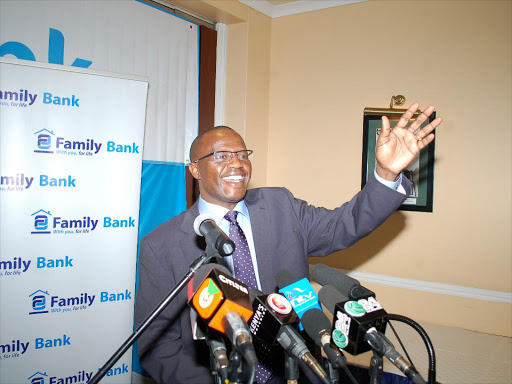 Family Bank said on Friday it has identified the successor to chief executive Peter Munyiri who will be exiting at the end of five-year first term in June.

Chairman Wilfred Kiboro said the bank is awaiting the Central Bank’s approval before it publicly unveils the next CEO of the mid-tier bank and details of the handover.

“The board has picked a CEO. We are expecting that when the time comes, there will be a smooth handover. Peter (Munyiri) is not going anywhere, he is still around,” he said said after the bank’s annual general meeting at the Kenya International Convention Centre. Kiboro declined to disclose the name of the person earmarked to take reins of Family Bank, and whether the next CEO is an insider.

Munyiri gave notice to leave the bank in January ahead of expiry of his five-year contract. His exit has been linked to the alleged loss of Sh791 million from the National Youth Service, which was first banked at Family Bank’s KTDA branch along Moi Avenue, but the lender has since refuted this.

Family Bank’s profit after taxation reached Sh1.98 billion from Sh1.81 billion year-on-year in 2015, the lender, whose shares are traded over-the-counter, reported in March.

Kiboro gave Munyiri a favourable scorecard, saying his leadership saw the bank grow its assets fivefold. Its assets stood at Sh81.2 billion as of December 2015, Kiboro said, compared to Sh26 billion in 2010 when Munyiri (pictured) took over.

Customer deposits at the time were Sh21 billion compared to the current Sh63.5 billion, while its customer base stood at one million, which has now jumped to 1.7 million, the board said. “It has been extraordinary in terms of what he has done,” Kiboro told journalists.

The shareholders approved the planned cash call of Sh4 billion in the next two months during the AGM, which the management said will ensure it stays above the statutory capital ratios and enable it fund its growth strategy.