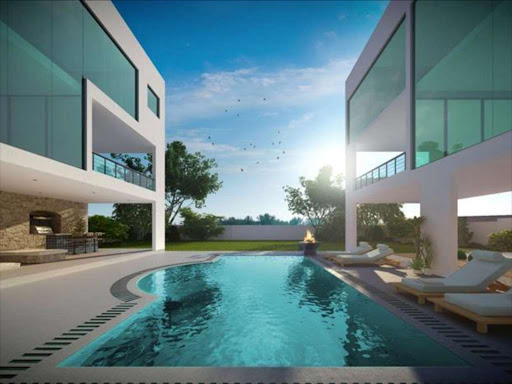 An architectural impression of the two luxurious MK Two- Exclusive Homes' 5-bedroom villas occupying 1,000 square metres (10,764 square feet) each on 0.5 acres on Milima Road in Karen. The villas set for completion in October are selling for $1.4 million (Sh142.16 million).

PROPERTY prices in Nairobi are set to start rising again this year after posting a near-flat growth last year as the high-end apartments left vacant by largely oil industry expatriates get reabsorbed into the market.

Knight Frank, the globally-renown property consultancy, says Nairobi was mainly hit hard by decline in global crude prices that resulted in scaling back of investments in the upstream oil industry.

“Some of these guys left behind big amounts of space. This is a very expatriate-heavy industry and a lot of those expatriates are gone, probably 70 to 80 per cent of them ... have left behind high-value rentals behind,” Knight Frank Kenya managing director Ben Woodhams said in an interview. “We have reabsorb those houses into the system.”

Average rental prices in Nairobi's 18 suburbs and 14 satellite towns fell by a marginal 0.1 per cent in the fourth quarter of last year compared with the quarter before, HassConsult report showed on January 25.

Rent for apartments fell the highest at 2.3 per cent largely on oversupply, with their market share estimated at 59.6 per cent in December – five times more than maisonettes and town houses combined.

Residents seeking to buy homes for their families or letting, however, continued to pay more in the last quarter of 2015 after asking prices rose by 3.6 per cent quarter-on-quarter, added the HassConsult report based on advertised property prices.

“We have seen a slowdown in both the residential rents and capital values… but, at the end of the day, Nairobi is the capital of the wider East Africa with a population of close to 180 million plus South Sudan. And so there will always be demand for property, ” Woodhams said. “I think this year, once we have reabsorbed all that oil space into the market, we will see the market start to rise again.”

HassConsult survey indicated rental yield – which measures earnings for developers without factoring in price movements (capital gains) – for apartments dropped to 6.29 per cent in the year to last December compared with 7.14 per cent the year before.

While the overall residential property experienced a slight slowdown last year, the value of luxurious property in Nairobi edged higher.

Asking residential prices, the Knight Frank Prime International Residential Index published on March 2 established, increased by 2.9 per cent. That was 1.5 percentage points higher than a 1.4 per cent rise in rent posted in 2014.

Nairobi’s ranking in the PIRI 100 subsequently improved to position 33 last year from 55 the year before. Nairobi was beaten by South Africa’s Cape Town and Johannesburg with 6.9 per cent and four per cent growth in residential prices, respectively, ranking at number 13 and 26 among the 100 global cities in the Knight Frank's annual survey.

“This increase demonstrates the resilience of the local market and marks the beginning of a recovery which may see demand for luxury homes return to the heady days of 2011,” Woodhams said in a statement last week. “Nairobi is a regional hub and, as such, there will always be a demand for high-end property, whether it is residential, offices, retail or industrial.”

The PIRI 100, published annually in The Wealth Report, tracks the change in prices of luxury residential property in 100 cities and second-home locations worldwide.

The list highlights cities such as Vancouver, which saw prices jump by 24.5 per cent on record-breaking demand, and Singapore with a 2.1 per cent drop – far better than the 12.4 per cent decline in 2014 – due to a recovery in demand.

The value of the PIRI 100 locations rose on average by 1.8 per cent last year, almost similar to the two per cent overall growth in the previous year.

The gap between the strongest- and weakest-performing luxury residential markets shrunk considerably, from 97 percentage points during the tumultuous times of global financial crisis in 2009 to 45 points last year.

One of the dominant issues that overshadowed the world’s key residential markets was the fallout from the shift to rising interest rates in the US.

The performance of luxurious residential prices was also influenced by rising supply pipelines, as developers in many prime markets took advantage of a combination of rising prices and low financing costs to deliver new homes at a significantly faster rate.

Knight Frank's analysts said that while investors globally need to be cautious, they will do well to take a long-term view and maintain focus on the leading urban centres.

“Prime city markets tend to bounce back quickest from any downturn and deliver relatively strong liquidity throughout market cycles,” the firm's global research chief Liam Bailey said in a statement.