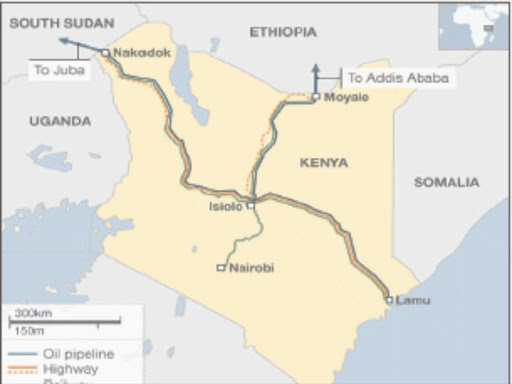 PROPOSEd PATh: An illustration of the proposed LAPPSET pipeline released by the Ministry of Energy.

KENYA is set to hold a meeting with Uganda in 10 days to discuss the joint oil pipeline plan, following reports that Uganda eyes a pipeline deal with Tanzania instead.

Reports emerged last week that Uganda and Tanzania plan to build their own pipeline between Tanga (in Tanzania) and Uganda, covering a distance of 1,120km with no details on the Sh400 billion Kenya-Uganda pipeline.

Andrew Kamau, the Principal secretary in the Petroleum ministry, said the meeting will discuss the security of the pipeline, funding, lowest cost tariff, and the speeding up of the constructing plans.

“You will remember that last year Kenya and Uganda signed an MoU for the construction of the crude oil pipeline, and there were concerns that were put in place. As far as we are concerned, that is what we are working on,” Kamau said after the launch of the Energy Journalism Excellence Awards in Nairobi yesterday.

Kamau downplayed the concerns over the pipeline row, saying Kenya would still construct its own to run between Lokichar in Turkana and Lamu instead of Hoima in Uganda to Lamu if the deal collapses.

“I think the backup plan is the pipeline construction from Lokichar to Lamu. I think that is not a point of dispute,” he said.

But analysts say this is not sustainable, given the new partnership between Uganda and Tanzania, while Ethiopia is now courting Djibouti.

Financial analyst AlyKhan Satchu said if the row persists Kenya will be left to rely on South Sudan.

“We have to keep in mind that South Sudan is starting from ground zero,” Satchu said.

Concerns around insecurity have also affected the project's implementation with fears that the pipeline could run near Somalia, facing the risk of attacks from al Shabaab militants.

Satchu added that Kenya could now be compelled to rethink the LAPPSET projects as most of the partners in the multi-billion-shilling project appear to be seeking other routes.

Kenya risks losing out on revenues that would have been accrued from commissions and fees of transporting oil through the pipeline.

Post a comment
WATCH: The latest videos from the Star
by JOAN WAIRIMU
Counties
10 March 2016 - 06:00
Read The E-Paper