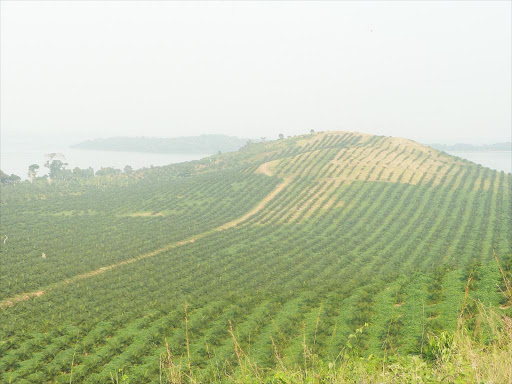 TARGET: Bidco plantations in Uganda. Farmers are accusing the Kenya based company of malpractices.

The Bugala Farmers Association accuses the cooking oil and soaps manufacturer in East Africa of failing to compensate farmers for their land it acquired at Bugala Island on Lake Victoria for its palm oil plantation. The group further claimed the company has committed environmental disasters and human rights violations in Tanzania and Kenya as well.

Last month, Bidco joined the Business Call to Action (BCtA) with a commitment to integrate an additional 30,000 smallholder farmers into its agriculture value chain and create 60,000 entrepreneurs and jobs by 2019. BCtA is UNDP's global initiative launched in 2008 that seeks to harness the power of business investments to reduce extreme poverty and improve the lives of millions.

“For those who know the real business practices of Bidco Africa and its CEO Vimal Shah, the embrace by BCtA of Bidco Africa is a tragedy for smallholder farmers and a major stain on the reputation of UNDP,” a petition signed by the farmers' group states.

The petition was delivered to UNDP's Kampala offices on January 28 by the Bugala Farmers Association.

In the petition, the farmers accuse Bidco of failing to comply with court orders to compensate the farmers for their land, the company’s labour practices in Uganda,

Tanzania and Kenya; alleged tax evasion in Kenya, and the deforestation of land for its palm oil production in Uganda.

Bidco has denied the claims. The company's communications manager Pharis Kimaru told the Star yesterday the move was a smear campaign based on false allegations. Kimaru said the company does not have ties with the UNDP but is part of the BCtA on a voluntary basis following its pledge to create 50,000 jobs after it joined this initiative last year.

"We pay Sh7 billion to the KRA (Kenya Revenue Authority) annually, we have multiple taxpayer trophies and the case these farmers are citing is one where we have disputed one tax item where we felt KRA's computation was wrong and it was overcharging us. The case is in court and I will not discuss it further," Kimaru told the Star.

Last October, Bidco's CEO Vimal Shah was forced to pull out of an investment conference in London to avoid protestors demonstrating against the firm's alleged poor human rights record.

The protestors who were mainly East Africans held placards and shouted: “Down with Vimal Shah” and “Stop Bidco” as conference participants arrived at Claridge’s, the 5-star London hotel in Mayfair.