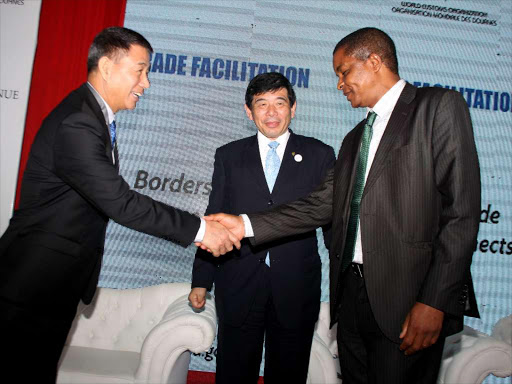 While Kenya and majority of Least Developed Countries are keen on a deal in Nairobi that will lead to full implementation of the dragging Doha talks of November 2001, a section of developing countries are strongly opposed to it, arguing the differences "are very wide".

The Doha Round lay the ground for the lengthy negotiations

on reduction of agricultural subsidies and industrial tariffs in developed countries – barriers seen as limiting access to the global markets by developing countries including the LDCs.

The head of Kenyan delegation, Foreign Affairs and International Trade PS Karanja Kibicho, appealed to the member states to show political commitment to ensuring the Doha Round agenda is delivered "without further delay".

"Kenya will through appropriate grouping clearly delineate the contours of what it considers to be the critical development outcomes that will respond to the demands of the Doha mandate," Kibicho said.

He told the meeting the MC10 Nairobi must end with a declaration that will lead to the conclusion of the Doha issues.

Failure by the WTO to strike a deal on implementation of the Doha Round has raised credibility questions over the 163-member body's ability to negotiate global trade deals.

Australian minister for Trade Andrew Robb, however, said the differences on implementing some of the Doha issues were "wide" and a "conclusive outcome is no longer clear".

He said the impasse over the Doha issues over the last 14 years will undermine the credibility of the WTO if allowed to persist.

Australia, Hong Kong, China, Brazil and India are among developing countries keen on the review of the Doha Round agenda. They are pushing for new issues including food security, government procurement and e-commerce.

WTO spokesperson Keith Rockwell said that the push for new issues was undermining the progress on the Doha Round issues.

"They [developing countries] don't agree that the Doha format is the right route...that's the threshold issue. If it's freed up, it will open room for other discussions," Rockwell told a press briefing. "We have had discussions on many of them already, but they are serving to distract the progress on the Doha Round."

Kibicho said the Nairobi talks should not end in failure, saying recent global meetings have all struck major deals.

He cited the adoption of the UN's agenda 2030 on Sustainable Development,the African Union's agenda 2063, the Third Financing for Development Action Plan in Addis Ababa and the Climate Change accord in Paris last Saturday.

"These proclamations challenged the trade and development community, which we are an integral part of, to revitalise the global partnerships for sustainable development," Kibicho said. "They also reaffirm the place of trade in the architecture of global economic co-operation. Therefore, Kenya is of the view that a new lease of life has been given to the Doha Development agenda."

Post a comment
WATCH: The latest videos from the Star
by CONSTANT MUNDA
Counties
17 December 2015 - 06:00
Read The E-Paper