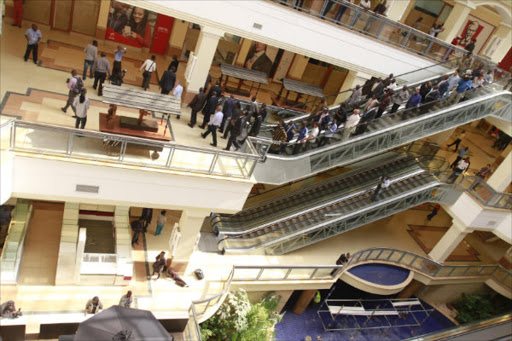 People walk use elevators at Westgate mall during a media tour before the re-opening of the mall on Saturday almost 2 years after it was hit by Alshaabab. Photo/MOnicah Mwangi

OWNERS of the Westgate Shopping Mall yesterday vowed to continue fighting for compensation from insurers when it reopened, 38 months after it was ruined during the attempts to flush out Al shabaab attackers who killed 69 people.

The Westgate owner, Sony Holdings Ltd said it suffered a major challenge in the reconstruction of the phase one which cost Sh1.7 billion after the insurer - Kenindia Insurance - failed to provide the required funds.

"The construction of the phase two requires Sh1 billion and we will use all legal avenues to get compensation because this is our money," said Alex Trachtenberg, the managing director of Sony Holdings.

The re-insurer of the Westgate is the Africa Trade Insurance.

Trachtenberg assured the previous tenants remain undeterred by the attack saying all will reopen their business soon except four who decided to relinquish their leases.

Nakumatt Supermarket, Westgate's anchor tenant, is set to resume business on Saturday, according to its managing director Atul Shah.

"The reconstruction of Westgate has given us more space and we have hired 250 staff up from 210 we had previously. We need the support of every shopper after we reopen business on Saturday," he said.

Post a comment
WATCH: The latest videos from the Star
by RICHARD MUNGAI
Counties
15 July 2015 - 07:00
Read The E-Paper